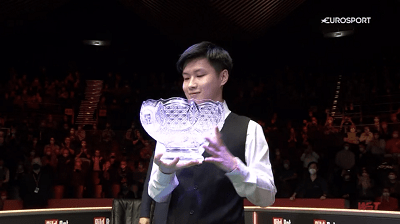 Last weekend was a busy weekend for both professional and amateur snooker.

He told a raucous German crowd at the Bildbet German Masters in Berlin at the Tempodrom that he was lucky because his mate was not at the races.

He said: “Bingtao did not play well today. I’m lucky.”

The 24-year-old Chinese superstar, who won the UK Championship in December 2021, is one of several Chinese players, along with Yan Bingtao, who practices at the Victoria Snooker Academy in Sheffield under the management of the personable Victoria Shi, who is like a MAM, a mum and manager to the Chinese players who practice there and have to move from one country to another to settle and play snooker.

Before the Major Chinese derby in Germany, she wrote on the Academy Facebook page:

“These two talented players have been based at Victoria’s Snooker academy since they turned professional. We have done our best to support them on and off the table. They are really delivering in the last 12 months! We look forward to the first ever Victoria Snooker derby in a major ranking final. We don’t mind who wins. We know the trophy is coming back to Sheffield and to Victoria’s Snooker Academy!!! 🏆

There will be plenty more Chinese snooker derby’s in the future as these two begin to grow into snooker superstars and winning machines.

On the other end of the snooker spectrum in the UK, hundreds of miles away from Germany, two mates from Woking Snooker Centre in Surrey, were contesting a handicap final on a Saturday night.

Woking C players in Div 2  Pete Butler and Ivan Astin shared the table as the Captain of the team Astin, defeated pal Butler 3 – 0.

Not but a week or so ago, they were celebrating their win in the Div 2 league with a game to spare, which happens this week.

Although not quite the heights of Germany with an 80K first prize, this is where snooker begins. With players winning handicap events and giving themselves confidence by winning these events. Winning breeds winning.

Astin had appeared in the handicap final before and won his first in a battle with Butler, who of course claimed a 63, the highest break in Division of the Byfleet Snooker League in Surrey this season.

Ivan Astin said after: “Won the Handicap Tournament for the first time this weekend. Finally. It was a tough one playing in the final with Peter Butler and wouldn’t have been bothered losing to a teammate and friend and thus felt bad putting him in snookers, ect. To be honest, the table favoured me with the handicap in place. I think he would have won it had the pockets been more forgiving, but I was on fire yesterday. Onwards and upwards.” 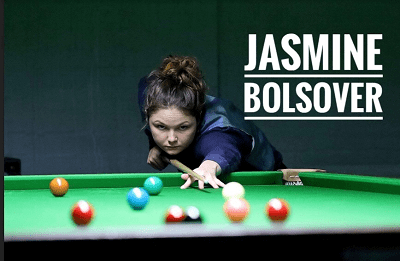 Woking Snooker Centre’s talented Jasmine Bolsover managed to reach the final of the EPSB Women’s Tour Event in Fareham as well at the weekend.

She came up against Jamie Hunter in the final, which proved to be a close contest despite a 3 – 1 loss.

Both have been interviewed by SnookerZone…

Jasmine Bolsover, 22, told SnookerZone after: Yeah, got to the final and lost the pivotal frame on a re-spotted black which I potted (good long pot) but the white went in off 🥲 so very close final.”

In Event Six, Jasmine reached the quarter-finals, losing out to Suzie Terry, 2 – 0.