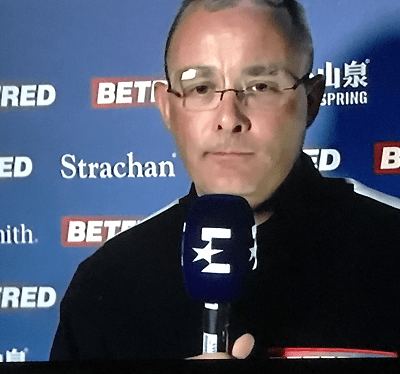 The draw for the 2020 BetFred World Snooker Championship has been announced.

Current World Champion Judd Trump will face Leicester’s Tom Ford, who came through the final qualifying round last night along with 7 other lucky qualifiers who get to play at the Theatre of Dreams in Sheffield to make up 16.

The draw was announced live on Eurosport’s live stream at just gone 11AM with MC Rob Walker announcing the names and former 1991 World Champion John Parrott picking out the numbered balls.

Due to the Coronavirus pandemic, it’s the first time a World Championships will have been hosted in the summer and the first time there will be a limited crowd in to watch 32 of the World’s best snooker players battle it out for the top prize of 500K.

On Tuesday, the final eight qualifiers were revealed with the likes of more golden oldies such as Matthew Stevens, who was denied a World title in 2005 by Shaun Murphy, who was the second player to win the title as a qualifier.

Blink and you’ll miss them…

Ronnie O’Sullivan is for the first time in a while NOT the favourite of the field as he will face the tour’s second-fastest player Thailand’s whirlwind Thepchaiya Un-Nooh in the first round. This is Un-Nooh’s third Crucible appearance.

It will be a case of youth v experience in many of the first- round encounters as the likes of Jamie Clarke, Switzerland’s Alexander Ursenbacher and Jordan Brown et al all appear on the big stage for the first time in Sheffield.

Martin Gould, who denied 2006 World Champion Scot Graeme Dott a Crucible place, who had only missed out on one Crucible  in 2014, will play Tour Championship winner Stephen Maguire, who’s big run in Milton Keynes secured him a top 16 spot.

Gould last night was emotional after his win with Dott and said that for him, lockdown had come at the right time when it did as he was struggling with some “demons,” but came through it.

Here’s the full list of who will be playing who in Round One.

SnookerZone wishes the 16 qualifiers who came through all the best and good luck.

5 Warm-Up Snooker Routines to Get You Focused

Houston, “We Made US Snooker History”…Igor Knocks in Top 146