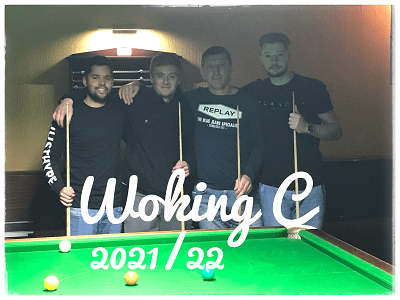 Woking C claimed another incredible whitewash on Thursday – their fourth of the season.

Ivan Astin’s team went to Egham United Services A and hit them for six – after having defeated rivals Staines Con D at Woking Snooker Centre by the same scoreline the week before.

This is the second time that Woking C have knocked the Egham side for six as they pulled off a 6 – 0 win in the second game of the season on September 30th.

Adam Hill told SnookerZone: “The team did well. Pete kicked things off, and won his games. I made a 29 (should have been more), but I’m finally on the break board. Ivan finished it off with tight frames against a player called Roy, who made a 27, but Ivan managed to claw his way back to win.”

He added: “It’s been a great team effort. I believe the Division is ours to lose. Would love to bring the trophy back to Woking, but still a long way to go. “

It puts them top of the league on 48 points, with nine straight wins out of 10 when they lost their first game way back on September 23rd.

Staines Con D are 10 points behind.

Not all the team players were available as Ivan Astin, Adam Hill, and Peter Butler played two frames each.

There are now so far five players who have made breaks over 25.

There are just two games to go before the Christmas break with ties at home and away to Hersham Sports and Social B and Walton Comrades B.

And after the break, there will be just five games left before it is determined who will be crowned champions of Division two.

The final game is on February 3rd.

Are you interested in joining a league side next season and playing?

Contact your local club or social venue and find out how you can get involved.

Play some players down the club and enjoy the social side and then ease your way in at some point.

Was it Make or Break for Woking C in the Byfleet League This Week?