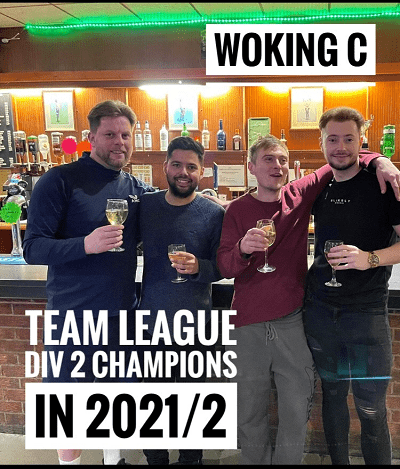 If you had told Woking C at the beginning of the season that they would win the Division 2 Byfleet League with a game to spare, you bet they would have bitten your hands off.

Their final game of the season ended in a 3 – 3 draw against West Byfleet Social D – and although for some in the team it would have been nice to have ended on a comprehensive win, the team of Ivan Astin, Adam Hill, Peter Butler, Bill Lee and Ivan Monchukoushvy can all stand tall for the brilliant part they’ve played in a thoroughly deserved victory.

They are winners standing tall on 74 points on top of the table.

And local snooker for Woking is also the winner. Courtesy of them, and the very small part SnookerZone has played in reporting on them.

SnookerZone’s Aim on this 14-week journey…

When SnookerZone decided to begin writing and following the team, from both a professional and personal level, the aim was to show readers here what league snooker is all about. And hopefully, show that there are thrills and spills just as much as there are in professional or top amateur snooker.

And, to show that regardless of the standard or the ability, snooker can be an exciting and fun experience to be involved in.

The game sometimes can be frustrating. SnookerZone knows this more than most. The highs of one-day feeling being able to accomplish anything on the table. And the next, well, (feeling like you’ve never held a cue in your life)…

But we all come back for more because snooker for the staunch fan like you and I is not just a game, it’s an addiction, a passion, and an obsession.

Whether you are playing on the table, nerves jangling, twitching, or cheering from the sidelines, perched on the edge of your seat eager to see that final long black smack the leather, or typing up the report on the computer, still feeling the exasperation of how the player missed a sitter, the game reels you in, hook, line, and sinker.

Snooker is like life. It has its ups. Downs. And rollercoaster rides.

One explanation we guess is it’s like missing a lover, absence makes the heart grow fonder, and when you’re apart, you can’t stop thinking about them. What’s happening? What’s going on?

For Woking C in snooker, the addiction continues to Division 1 next season. An addiction that will have many highs and lows.

But if there is that burning fire in their bellies and that bright sparkle in their eyes, any emotions will be put to the side and they will knuckle down and push on.

To quote from a book The Talent Code…

A baseball coach who camps out on “his field,” living, breathing, and sleeping the game he loves, he tells the author of the book…

“With a princely gaze, Curiel surveys his domain. “To play ball, you need three things,” touching his body as if he was doing the sign of the cross.

He added: “Heart. Mind. Balls. If you have two, you can play, but you will never be great. To be great, all three.”

For now, SnookerZone offers them his full congratulations.

Was it Make or Break for Woking C in the Byfleet League This Week?