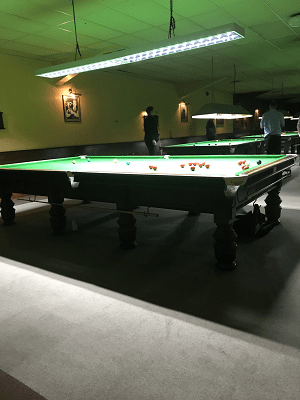 WOKING C got BYE this week, but how far are they ahead?

With a BYE this week for Ivan Astin’s Woking C team, it was time to see how the other teams would fair without Woking C playing this week.

All eyes would be on Staines Con D who are one of the main contenders to take Division 2 this season, along with Woking C, who have both had an impressive run of only losing or drawing one match since the League returned on 23rd September.

However, Staines Con D managed a comfortable 5 – 1 win against their opponents New Haw Social C this week and have moved to within 3 points of the top with Woking C on 32 and Staines Con D on 29.

Both have played 7 and won 6 with Staines Con D having drawn 1, rather than lost 1.

It’s all to play for for Woking C’s team as Ivan Astin told SnookerZone about their bye yesterday.

“Kinda glad, gives the other teams a chance to catch up on frames, and see how far ahead we actually are.”

Only Woking’s A and B sides were playing at home at Woking Snooker Centre yesterday.

In Division 1, a break of 76 was made by Steve Williams. That’s only 13 points more than Pete Butler’s break in Division 2 he made a week or so ago.

Check out the full results on the BFSL website, here…

How to Form a Local Snooker League Team…