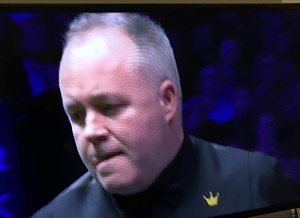 WIZARD John Higgins has racked his 10th career maximum and the first Crucible 147 since 2012.

The 36 pots of magic came in his tight tussle between Norway’s Kurt Maflin which currently stands at 8 – 8.

The 45-year-old’s perfect break is the first in the history of the Crucible to be played without an audience seeing it – as hundreds of millions would have been viewing it on TV.

He told WST: “This will probably surpass any tournament with the standard you will see. Everybody will be giving it everything for a month solid and put the tough hours in. Everybody will be hungry, there will be nobody tired or jaded. They will all be going in firing on all cylinders. I really think it could be the best tournament standard-wise. Even though we might not have the crowd, I think it could be the best.”

The last time a maximum break was made was 8 years ago when Stephen Hendry made his last swan song at the Theatre of Dreams and made it against Stuart Bingham.

There have been 11 147s made at the Crucible, with Cliff Thorburn making the first-ever maximum in 1983. Higgins’s is his first he has made at the Sheffield based Theatre.

The Wizard added: “Everything involved adds up to that. Mentally people will be giving it extra because the event could have been taken away from them. Everyone will be sharp as a tack. It could break all the records in terms of centuries. I definitely think there will be a maximum break. There are only a select few players that have made one at the Crucible before. I think the whole situation and the crowd gets on top of you normally at the Crucible. I’d be very surprised if there wasn’t one or maybe even two this year.”

Assuming Higgins’s 147 is the only one made, and there have been a  few attempts already in the first round, he stands to pocket a total of £55K.

Watch the magic break below now…