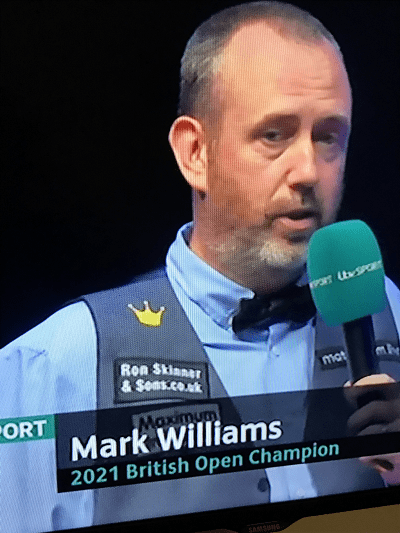 The 47-year-old Welsh Potting Machine was 7 – 1 up yesterday before stretching his lead even further and needed just one frame at 12 -2 before Page capitalized on a missed black from Williams to keep Willo on 12 today.

But although the slight glint of form from Jackson was apparent, it was too late before the current British Open Champion this season came through 13 – 3.

The match had started with much hype over the close relationship between the two players as Williams has taken the 20-year-old talent under his wing for some years and has been schooling him in the game as well as spending time off the table playing poker, golf, and other activities.

Jokily, to break the ice, Jackson did a Mark Williams break off in the very first frame, expecting a bit of light banter to begin the match.

But Williams wasn’t in the mood to joke around and raced into a 4 – 0 lead early on – with a blitz of breaks and top quality snooker.

🎱 World No8 @markwil147, 47, has mentored debutant Page, 20, since he was 14 and admits it will be tough to put a close friendship with his protégé aside…

Stephen Hendry, not a fan of players spending so much time together in the commentary was very critical of the amount of time they were spending together before the match and advised Jackson to stay well away from his Master if he was to get into the winning mindset for the last 16 encounter.

He said on Facebook: “When a 7 times World Champion says to stay well clear of him before the match, it’s probably a good idea to take his advice.”

Hendry, famous in the 90s for his ruthless and steely and lonesome existence on tour, said in commentary, he wouldn’t be doing it.

Let’s see who gets the upper hand on the poker table 😎😂 pic.twitter.com/4RXGlFLQV3

Page had displayed great form in his first round against Barry Hawkins making back-to-back centuries to win the match.

That’s two Welshmen Mark Williams has despatched of during the 2022 Betfred World Championships so far.

Watch: Magical Williams in fine form and was 33/1 at the outset to win the title…