Imagine, you’re on a key shot in a break and you get a bad kick – and it costs you the frame. You’re miked off because you were on a roll and that frame was key to you going ahead. Instead, your opponent pushes on and wins the match. ALL down to that frame where you got a kick!

Do you get frustrated using chalk that’s messy on the table and causes more kicks that costs you frames, and EVEN matches? I bet you do, right? What’s more, I bet you’re probably fearing you’ll get a kick at some point in a frame, but just don’t know when it’ll come! Am I right?

Well, now, fear no more, as the revolutionary Taom chalk version 2.0 is here and will save you the worry that when you’re on a key shot in a break you won’t get a kick or bad contact.

Just think how many more frames you could win, because you were less worried about having a bad contact or a kick on a key shot! You’d be more focused. You’d have your mind totally on the pot, wouldn’t you?

Here’s why you should get your hands on a piece of Taom! Read on…

When you get sent your revolutionary piece of Taom chalk, you will be hit by the style and the quality.

It’s presented in a neat stylish box which sets the bar above all other chalks in cue sports.

After picking it out of the box, you can’t help but marvel at the style. For a piece of chalk, it really does have that “je ne se quoi!” The first test is to see how much of the chalk will rub off on your hands. Fresh out of the box, this chalk hardly gets any chalk marks on your hand. However, if you rub the other chalks such as Triangle or Triangle Pro or National Tournament chalk, your hands get in a huge mess.

Another unique aspect of this product is the smell initially– it’s a very pungent but pleasant smell – and you will become addicted to it!

Make sure you wipe off all other bits of chalk dust from previous chalks from your cue tip with a dry cloth, so that the tip has a proper coating of Taom. I’ve recently put a Grade 2 Century Cue Pro Tip on my cue and found that Taom provides a nice even coating on this particular brand of snooker tip.

HOW DOES TAOM PLAY IN ACTION?

I took Taom for a whirl down the club and played with it for a total of five hours on Saturday and Sunday. It was the cleanest chalk in the business. Left no mess at all on the table and I only had 2 miscues in the whole practice sessions. I play with a Century Pro Cue tip Grade 2 and Taom seems to give a good coating on Century tips. It seems to give you a good grip on for deep screws and you can generate a good amount of spin. Of course, you need to have a good solid technique already to perform most shots, but, having a solid coating of chalk and a good tip is also key to playing some great shots on a snooker table.

You get what you pay for.

If you want a chalk that:

Then Taom chalk is the chalk for you.

Read the SnookerZone interview with Taom inventor Toni Ursin: Click on the Toni image below!

Say Goodbye to Messiness, kicks, and bad contacts! Start Using Taom Chalk Now AND Have No Fear! Click the Image Below to Get Your Piece of Magic 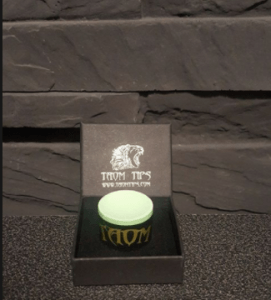 UPDATE: After playing with this chalk now for more than six weeks, SnookerZone has noticed these points:

The new Taom snooker chalk version 2.0 continues to cause a storm in snooker – but has received great reviews on Amazon and ebay – but people still continue to type in questions into the search engines wanting to know about the chalk.

SnookerZone has already been using it for well over nine weeks now. In fact, it’s now our chalk of choice!

Here’s the frequently asked questions that people are typing into Google about Taom.

A new chalk from creators in Finland that reduces kicks leaves hardly any mess on the table and hardly causes any miscues – which is down mostly to poor cueing from the player!

How to use Taom chalk?

Just like any other chalk, Taom is used by spreading the chalk onto the cue tip very gently and applying it frequently – every shot. When you first get Taom chalk, remember to wipe off with a tissue or cloth all other excess chalk from your cue tip so that you have all of Taom on your tip!

How long does Taom chalk last?

Depending on how much you play  – SnookerZone has been using the chalk regularly for nine weeks now and the chalk has barely scraped the surface in terms of how it looks! It looks just the same as when it was first taken out of the box!

Many top professionals are using the chalk and swear by it – and even top amateurs also as well – even some club players use it. It’s becoming the widely used chalk of choice for many players in snooker. From World Champions to club players, Taom is becoming the no 1 chalk in snooker.

Why is Taom Chalk so expensive?

If SnookerZone knew the answer to that one, he’d be rich beyond his wildest dreams! Joking apart, it’s because it is a quality product that when you try it out, you will realise why it comes at a hefty price tag! It does three things:

You get what you pay for!

How to improve Taom chalk?

It has received some very good feedback from reading reviews on Amazon and ebay and anywhere where people hang out and talk about snooker! One Amazon reviewer said this which is a fair point on how to improve the chalk further.

“This chalk is very decent. I’ve used it for some time now and it does not cling or gather on the cue or object balls (minimal kicks) . People state you are more prone to mis-cues but I am a firm believer this is solely down to poor technique.
I will continue to use this chalk but I would really love it if they made a square version. I find it doesn’t sit too well in the pocket or chalk pouch as a result of it being round and more often get it on my fingers and hands unnecessarily.”