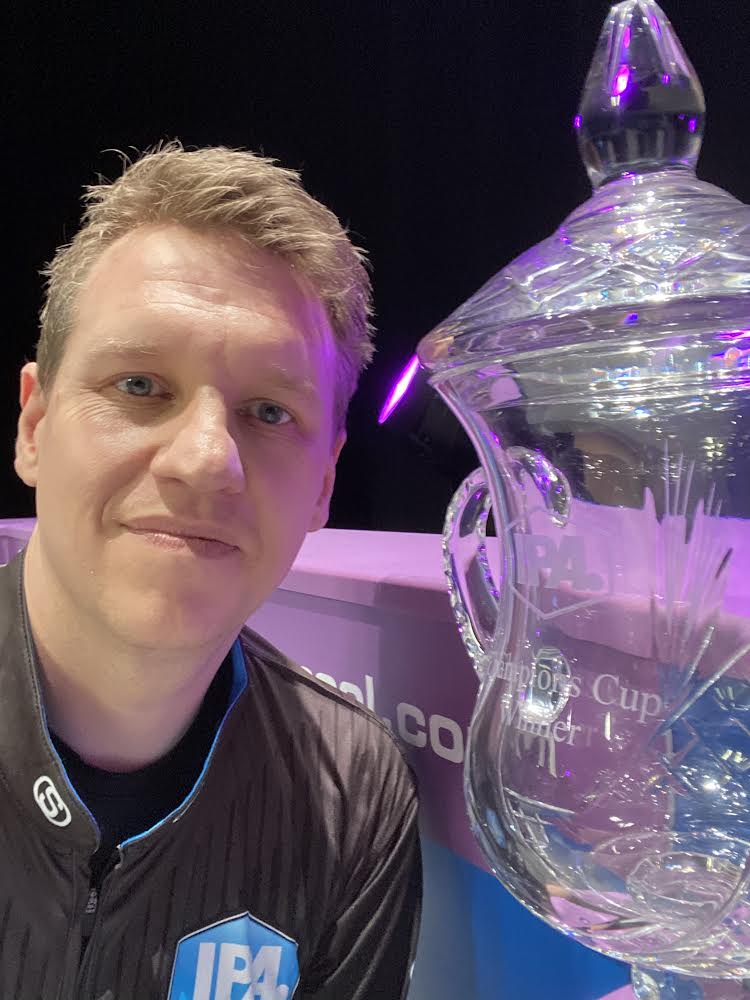 INTERNATIONAL POOL ASSOCIATION referee (IPA) Ben Taylor Fuente says the No 1 secret to being a good referee is…Find out in SnookerZone’s EXCLUSIVE interview.

The 39-year-old is currently studying for his snooker refereeing qualifications under the eagle-eyed guidance of top snooker referees Jan Verhaas, Brendan Moore, and Paul Collier, all have refereed snooker’s top event the World Snooker Championship.

And Ben said he is hoping to get some experience under his belt in the amateur scene at Woking Snooker Centre in Surrey where he is hoping to referee some tournaments there in future – as he moved to the Woking area prior to Lockdown.

Ben told SnookerZone: “Concentration is the number one trait that is shared by the best referees in the world. Most skills can be learned, but to be a good referee you need to be able to be impartial, professional and know the game. Getting the respect of the players is key to becoming a recognised referee, and the thing that takes longest.  If you are fair, honest, respectful, but (importantly) not afraid to make decisions, you will learn this over time.  You have to be willing to step out of the limelight to make the players shine, and practice constant improvement through open and honest performance reviews – there’s little room for ego as a referee. Rules can be learned, but character can be much tougher to change.”

Ben has always been a cue sports fan and wanted to be involved in the industry when he knew playing wasn’t necessarily a workable option.

He said: “I was always engrossed by snooker on the TV from a very young age – before I could even walk! My parents say I was transfixed by it and I would sit and watch it for hours. My uncle made me a small table to practice on and I have never stopped playing.”

WATCH: BEN IN ACTION ON THE POOL TABLE – BELOW…

As a referee in cue sports, you are always learning says Ben and there are always those awkward moments that you have to handle like a professional and admit your mistakes when you get it wrong.

Ben recounts one such moment: “I can remember one incident where I was not refereeing but timing the match (in pool, players have a shot clock and must play a shot before the timer expires). I did not reset the shot clock after one shot, meaning the player was not given enough time to play the next shot and a foul was called. The player immediately questioned this and we reviewed the footage – my mistake was found and we were able to rectify the error and allow the player to continue.

He added: This is important as it could have resulted in a different match outcome if I had not swallowed my pride and admitted I could be wrong. The important thing is to learn from your mistakes and try not to make the same mistake again.

There are many people in snooker who have opinions about how the game should develop, and Ben is no exception. He believes like some others that the game needs modernizing and breaking away from the traditions if it is to attract younger people who will want to stick with it.

He said: “It may be a slightly controversial opinion, but I think snooker can sometimes be stuck in traditions more than other sports which might limit its appeal going forwards. For example, I would love to see players being able to wear polo shirts and the suchlike in many events rather than a traditional shirt, tie and waistcoat (although I also think some events should retain this, such as the World Championships).

He added: “I think being obsessed by tradition and history means junior uptake of the sport appears to be lower than it has been for many years – if the sport is to continue to flourish we need to encourage juniors to take it up and be the new professionals. They don’t want to be dressing up in what is effectively a suit and tie.

To some degree, Ben is spot on. Let’s give snooker players an identity, and let them mold their own personalities. Give the fans something they can identify with. And that they can latch on to.

Naturally, Ben admires those top referees that he is now training with. And luckily gets to have ZOOM conversations with as part of the EPSB’s (English Partnership of Snooker and Billiards’) referee training program.

He added: “In terms of pool, I have watched Nige Rees for many years – he is a referee of the highest quality. I think he last refereed in the World Pool Championship in 2019, and called a foul where a player’s tip accidentally touched a ball when just lining up a shot (before looking to cue a shot) – this was 100% correct and a foul many referees would have missed and it goes back to that point of always concentrating – his decision was immediate, correct and meant that something that could have become a talking point if missed was immediately quashed, and therefore the correct player won.

It’s disappointing that I haven’t seen him referee since that day and hope to see him back at some point in the future.

Ben said further: “Another pool referee I admire is the current IPA senior referee, Scott McMillan. Scott has reffed the last two IPA World Championship finals and is one of the most methodical, logical and selfless people I know.  I have worked under several senior referees in different organizations and Scott is very different to them – whereas most will always insist on refereeing the event final and will not be receptive to criticism, Scott has given many referees (myself included) their first opportunities to referee big event finals – essentially, if you’re good enough, you’ll get the chance.”

Ben said he also actively encourages constructive criticism so that he can always improve, and never takes anything personally.

“I owe a lot to Scott for taking a chance on me and the amount he has taught me is priceless and lessons I will always take forwards and pass on to those I train.”

SnookerZone would like to thank Ben for his time and wish him well in his snooker refereeing career and maybe we’ll see him at Woking Snooker Centre soon!