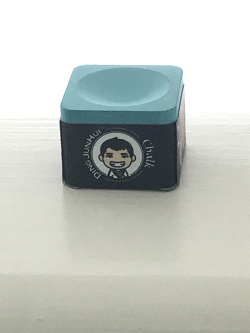 Ding Junhui chalk is the first chalk of its kind to have an avatar of a player on it.

Ding Junhui and his team at the Ding Junhui Snooker Academy in Sheffield have created the first chalk to have a player’s avatar on it – Ding himself.

The Chinese snooker star sensation, opened a new snooker academy in Sheffield designed to house the next generation of Chinese and foreign snooker stars, but more importantly, create a professional atmosphere that is lacking in some clubs across the country.

You’ve got some real young talent going in there – Stan Moody, who is hoping to turn pro has been seen in there a few times.

But as well as putting his name to the Academy, Ding has also been seen playing with his own brand of chalk, as well as some of the other players.

Ding has come a long way since his days as a youngster when he won his first ranking event back in 2005 at the China Open.

He is now a global superstar and brand name and is admired both in the UK by UK snooker fans and Chinese fans.

STICK YOUR NOSE INTO A PIECE HERE NOW!

So what’s special about it?

STICK YOUR NOSE INTO A BLOCK BY GOING HERE NOW…

When SnookerZone can get back to playing in a snooker club when the corona virus pandemic has died down, we’ll be trying out this chalk, as well as Taom Pyro and Sniper chalk from Glygen to give the lowdown on how the chalks compare.