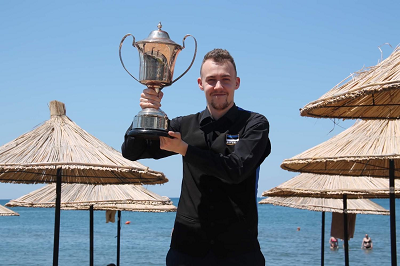 ANDRES PETROV is Estonia’s first snooker professional after scooping the 2022 European Amateur Crown at the end of last week.

The 25-year-old from Tallinn spoke to SnookerZone to give us his reactions to his joyful news of joining the elite of snooker to compete with the likes of Ronnie O’Sullivan, Neil Robertson, and Judd Trump, battles which he says he is relishing.

He told SnookerZone about the tour card award: “It means the world to me. All I was dreaming about since a kid was about that I could get there to try myself against the best. Now I succeeded and will have my chance.”

He added: “I hope that me being a professional gives a big boost for snooker in Estonia and in the Baltic countries as well.”

Not only is Petrov a new snooker professional and joins a new list of players this season, but he is also an expectant father and he said that was probably the secret to him winning the amateur crown in Albania to get awarded the tour card.

He practices on his own Star table in Estonia, as there are not many good facilities to play in the country.

“The conditions are quite poor, he added.”

He has been coaching some children in Estonia and helping to grow the game back in the country and a student of his had the chance to play some frames at the European Championships.

Petrov first saw snooker on TV in 2006 when Graeme Dott won the World title and the first match he saw was Stephen Hendry versus Nigel Bond and from that moment he was hooked.

He started practicing in 2009 and won his first tournament the same year and remembers it vividly like it was yesterday because in the semi-finals, he won on the black as his opponent potted the cue ball.

In 2014, a coach named Alan Trigg took his game to another level and made him hungry for the big amateur tournaments such as the European Championship.

Now though, Petrov will do battle against the big boys but has no fear, he said.

As with many players from overseas, there is the distinct possibility that they will have to move to the UK to practice their trade at the highest level.

Snooker Academies such as Victoria Snooker Academy in Sheffield run by Victoria Shi welcome players from all over the globe to come and ply their trade and be taken care of like a family.

Petrov adds though: “I don’t really know. Probably at some point, I will have to (move to the UK) but we’ll see. The Vic Academy is looking great. If I get a chance to practice there, it would be very nice.”

“I don’t set any goals (at this stage) because I know what I’m capable of and I don’t want to have any made-up barriers for myself.”

Finally, Petrov’s baby will be born next month, and he said it means the world to him to have his wife and child by his side.

He added: “That’s the secret, how I won the European Championship and the Tour Card.”

We wish Andres Petrov the best of wishes in his new phase of snooker on the main tour and also wish his family well.