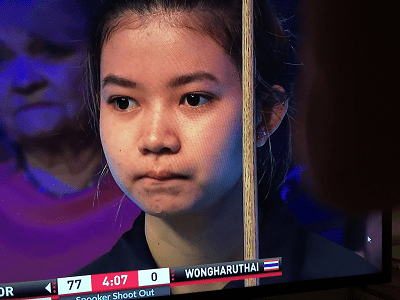 The 2020 Betvictor Snooker Shootout is currently on in Watford.

It’s fast, it’s furious, it’s fun, but it’s also controversial as it’s a ranking event with 128 players battling it out in one frame shootouts over 10-minute frames with 15 seconds on the first five mins and 10 seconds a shot on the last five.

The winner on Sunday will bag 50K.

The event showcases MOST of the tour’s best players, and in the 2020 edition, Ronnie O’Sullivan will be making an appearance on Friday evening.

However, the event also showcases some of the world’s talented amateurs – including the talented female known as Mink, Nutcharut Wongharuthai from Thailand.

She, along with 12-times World Champion Reanne Evans play in the event.

Last year, SnookerZone proudly interviewed the talented U-21 Champion Emma Parker, who did manage to get some shots in the 2019 edition!

Snooker is a cruel game…

However, the 20-year-old gifted Thai, runner-up in the World Championships last year, who’s also made an acclaimed 147 in practice, sadly didn’t get to showcase her skills LIVE on TV on Thursday night.

Unfortunately, she was overshadowed by Malaysian professional Thor Leong, who, has not won a match all season, and, as soon he gets to the Shootout and draws Mink, this happens!.

Mink’s break-off was decent. But, it was the Malaysian who potted a cool long red to get in, and made a 133 the highest break so far of the event.

His 133 superseded China’s teenage star Chang Bingyu, who made a cool 120.

Just shows you, you can do nothing when your opponent is at the table potting balls. That’s what is so fascinating about snooker.

That’s why we love it!

The Shootout continues until Sunday.

PS: Watch Mink’s 147 at Hi End in Thailand below if you’ve not seen it…