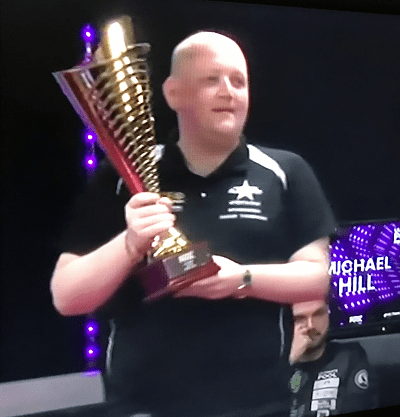 AFTER a weekend of highs and lows in the Ultimate Pool Pro Series Events 5 and 6, two worthy winners came through a marathon weekend of Eightball, which started on Friday.

Top-seeded player Shane Thompson yet again showed his class to scoop his third UPPS title out of four in months as he demolished Michael Hill in the final of Event Six.

He told the UPPS team of Steven Jamieson and Simon Webb on Freesports that he was just zoned in.

Sound advice there for anyone wanting to get on in playing cue sports.

“Let’s be honest. It was rubbish.

If you don’t take your chances, then you don’t deserve to win, he said.

Proceedings were very different in the final, though, as Thompson – despite initially going 2-1 down – chalked up eight of the next nine frames for a resounding 9-3 triumph.

The Bristolian moves onto 20,000 points at the top of the rankings, well clear of Storry and Declan Brennan who are both on 12,500.

In the other event, event five, it was another resounding win with Storry defeating Carl Morris, who was elated to be in the final, but had apologized to his son on national TV for missing his birthday, and also losing in the final.

Similarly, Shaun Storry (pic below) also was meant to be somewhere else he admitted but was happy to be in this tournament. 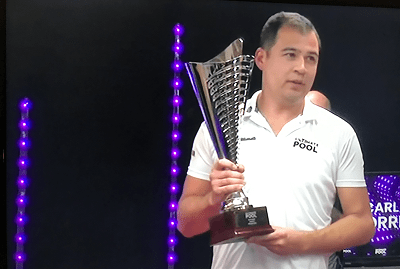 Storry quipped: “Like Carl, I had somewhere else to be. I was meant to be holidaying in the Cotswolds. But ended up in this tournament.”

Morris – the sport’s youngest world champion when he was just 18 years old in 1998 – was back in the big time after a memorable run to the title match.

‘Houdini’ was relatively untroubled as he got the better of Craig Lakin 7-3 and Rob Chilton 7-2 in the opening rounds but it was his last eight thriller against reigning world blackball champion Scott Gillespie that will live long in the memory.

Appearing to be down and out with time wearing very thin, Morris somehow conjured up an amazing clutch clearance – albeit with the help of a fluke – to square the match 5-5 on the buzzer. He then went on to win the subsequent 6-reds shootout to leave the Scot and audience stunned in what was a midnight finish. In the last four he comfortably negotiated the resurgent Greg Batten 7-2.

Thompson continues to enjoy his dream campaign on this inaugural Professional Series as he picked up an incredible third trophy of the season and extended his lead at the top of the rankings.

Playing on the same weekend, was the Ultimate Pool Challenger Series where amateurs compete to play in the pro line up in 2022.

Open to all amateur 8-ball pool players, 128 cueists entered both Events 5 and 6 at the Players Pool and Snooker Lounge in Newcastle-under-Lyme this past weekend but it was familiar names taking the top honours.

We followed talented youngster Luke Gilbert, who SnookerZone had interviewed before this event and he said on his Facebook after:

“I lost in the last-16 of both events. 400 ranking points picked up for the weekend. Was ranked 5th. It’s time to wait until the updated rankings are released so I know what I need to do in the final weekend to try and earn a pro spot.

The next Ultimate Pool Pro Series Events will be held in December, but don’t forget that every Monday night is the Ultimate Pool Pairs Cup also live on Freesports Channel 64 in the UK, and on the website.

Check out the UPG site – and all the coverage – here…

Watch: How to cue better and boost your confidence, QUICKER…