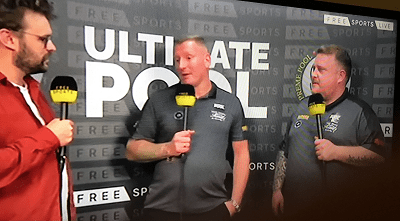 THE MAGICIAN Chris Melling and his Ultimate Pool pair partner Scott Gillespie were the favourites to progress from this week’s Group  in the Ultimate Pool Pairs Cup.

But, it wasn’t to be for the dynamic duo, as they were trumped by the unlikely pair of Tony Blount and Scott Crawley (pictured) who scooped all three of their matches in fine fashion with some spectacular individual shots in some which shocked even the likes of the Magician Melling.

There was no drama this week with six reds shootouts, but fans did see a “Golden Break” where Jake Newlove potted the 8 ball off the break.

Melling, 42, was a former professional snooker player and, like in the previous weeks where the event saw the likes of four-time World Snooker Champion Mark Selby go through in dramatic fashion, the two-time World 8 Ball Champion in 2001/03 Melling couldn’t follow 2006 World Pool Champion Selby into the Last 16 of the event.

His pairs partner Scott Gillespie had just got married and was still technically on his honeymoon but detoured on to play in the UPPC.

For the pairing of Kevin Kirkham and Rob Sim it was their first appearance in pool on TV and gave a good account of themselves.

The Ultimate Pool Pairs Cup is on every Monday nights on Freesports Channel 64 at 6:30PM.

SEE the full details on the Ultimate Pool website, here…