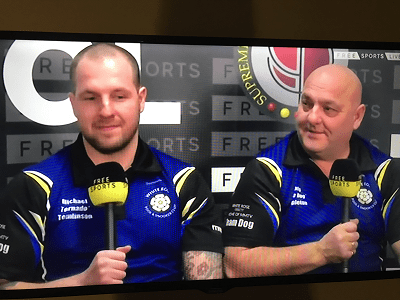 After the Christmas and New Year festivities, it was back to business for the Ultimate Pool pairs as four pairs who had made it through the group stages early on returned to do battle on the little table in week 17.

After this week, there’s three more weeks left before final’s night at the end of January.

Fans saw the return of the likes of Tony Blount (Big Juicy) and Scott Crawley, as well as the favourites of Arfan “The Daddy” Dad and his pairing of new Ultimate Pool Professional Craig Waddingham.

But it was the pairing of Andy Appleton and Michael Tomlinson who were the first pair to reach final’s night in just under four weeks’ time at the end of January as they managed to deny Dad and Waddingham a place.

It came down to the last match as Dad and Waddingham faced Blount and Crawley and needed to win to progress but Big Juicy and the Broski did Appleton and Tomlinson a favour by holding the favourites to a 2 – 2 draw to deny them the chance to progress.

After the match, a relieved Michael Tomlinson said: “I think we qualified about 3 times there.”

It was touch and go as he added that he was willing Big Juicy and the Broski on.

Andy Appleton said they were living and breathing the whole thing and said even if it had gone to a six reds shootout against Dad and Waddingham, which it was on the verge of happening in the final match, he wouldn’t have minded at the time.

It was a disappointing night for the oldest pairing who still remained in the competition as Neil Davey and Steve Singh, with a combined age of 106, didn’t manage to find the form they had found in the Group stages to go through.

Next week, the drama continues with a juicy line-up of Legends Michael Hill and Phil Harrison taking on the young guns of Dom Cooney and his recent graduate pairing to the Ultimate Pool pro ranks of Luke Gilbert.

It will be a tough matchup next week.

Andy Appleton & Michael Tomlinson secure their place in the Final 4, after an evening of pool, that left us all guessing until the very last seconds!#UltimatePoolPairs pic.twitter.com/i7NcqWUbgD

Arfan Dad and Craig Waddingham drew with Tomlinson and Appleton 2 – 2.

And Tony Blount and Crawley drew with Dad and Waddingham in the final match 2 – 2.

The drama continues next week on Freesports Channel 64 in the UK and can be watched by non-UK watchers on the website.

For snooker fans, Mark Selby plays on the 17th January.

2021 Ultimate Pool Pairs Cup: Even the Cats Love it…