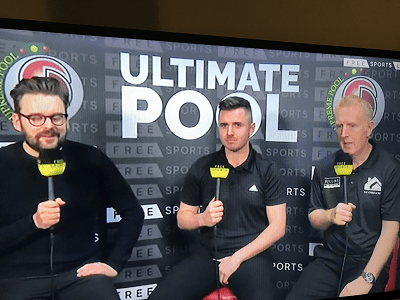 Ultimate Pool professional Declan Brennan and his legend partner Ronan McCarthy were the favourites in week 13 of the 21-week marathon but it was touch and go in their last match as they squeezed a draw preventing them from taking part in the dramatic six-reds shootout which they said beforehand they had not really practised much.

It was plain sailing for the Northern Ireland duo in their first two games, but from 2 – 1 down in the last at 2 mins 43 on the clock they needed to nick a frame to have any chance of going through. And they got it.

Ultimate Pool Pairs games have a 20 min clock and whoever is in front wins – but if a team reaches four frames before the clock, they’ve also won. A point is scored for a draw and two points for a win.

He added about his pairing with McCarthy: “We make a good team.”

Brennan said that with his Ultimate Pool experience and McCarthy’s flair on the table, they had a good chance of lifting the title in 2022.

However, with a star studied line-up going into the last 16 of the event in 2022, it’s going to be even more difficult to call who will win the trophy in Newcastle-Under-Lyme.

Brennan will be back in action this weekend for events 7 and 8 of the Professional Series which will be shown live on FreeSports TV and ultimatepool.tv.