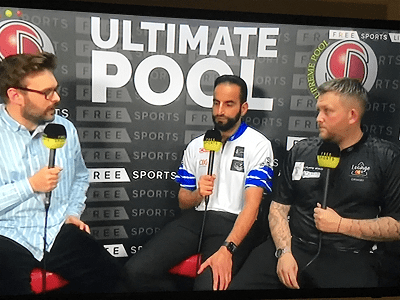 The Ultimate Pool Pairs Cup was back on our screens again on Monday night as 4 more pairs teamed up, with one pair hoping to shine through to progress to the next stage of this 21-week marathon of pool doubles.

Favourites were top pool players Arfan Dad and Craig Waddingham and they didn’t disappoint as they comfortably sailed through their matches to progress from Group 7 of the Ultimate Pool Pairs Cup.

It was good news for top pool player Arfan Dad who had apparently won the World Rules comp earlier on days ago and his son, he said, had just got into grammar school.

He added: “It’s good news all around for me.”

His partner Craig Waddingham was apparently playing for an old lady fan where he lives who loves watching snooker and pool on the TV called Milly.

Waddingham told the Ultimate Pool team after the match:

“It can be brutal on the Ultimate Pool now.”

Even if you’re the favourites in the group, there’s just no guarantee that you’ll come through it as they are all tough matches, he said.

“But you just have to get through it.”

The other pairs included the talented duo of Chris Patient, nicknamed King Pigeon, and Mark Gray, 48, from Boston, formerly a decent snooker pro player in his time and also a three-time Mosconi Cup winner.

His highest break in snooker in pro competition was 145 with a highest ranking of 79.

On this episode of The CueClub Podcast I’m joined by Craig Waddingham. This talented cueist is well known and respected in the pool world having won titles on the GB9 9-Ball circuit and making it to the final of the WEPF World Pool Championship Final in 2013 .

Craig is also a huge money match player and has faced some of the world’s finest in front of large crowds for over £30,000.00.

Join us as he discusses what got him into cue sports, his favourite money match to date and how he deals with pressure.

At the weekend, the Ultimate Pool Pro Series returns. More details are on the website.