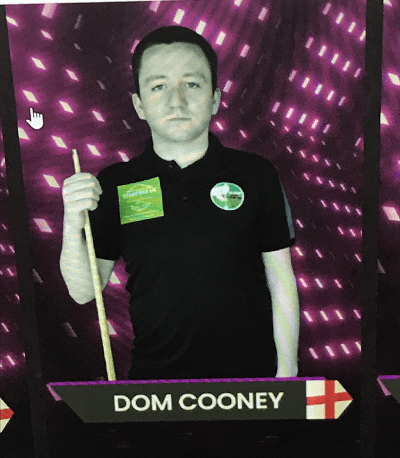 LAST WEEKEND, another 8-Ball event in the new Ultimate Pool Series was held in Newcastle-Under-Lyme in Stoke-on-Trent as Declan Brennan defeated all-time great Chris Melling to lift his first title.

The Ultimate Pool Series is a new style series of events and is being serialized on Freeview channels such as Freesports 64 to try and gain some more traction in what has become a waning sport – 8-ball pool.

Although there’s plenty of pool (nine-ball) on Sky Sports with events such as the Mosconi Cup, etc, SnookerZone gets the sense it’s a struggling sport and needs a bit of a boost.

We managed to catch up with one of the players who was fortunate enough he said to be invited to the 32 player elite series – Dom Cooney, nicknamed the Dominator, to get his views on the sport that he began playing as a kid in his mother and father’s pub – having to stand on crates to play the table.

When he was 11, he said he began playing snooker at the 147 Club in Huntingdon, Cambridgeshire and then at around 17 he then started returning to pool and played for his County so he could represent his Country’s youth team.

Cooney, a window cleaner by trade, now 27, said: “From a young age I played because it was just something to do in my mum and dad’s pub and it quickly became very addictive potting balls and beating some of the locals. When I got older and started entering tournaments, I just loved competing and since then I couldn’t tell you how many tourneys I’ve played in… it loads haha.

Cooney said on his fortune on being invited  to the UPS:

“I was fortunate enough to be offered the chance to be an ultimate pool professional and playing in the ultimate pool series is fantastic. I got to the Last 16 and a Semi Final on the first 2 events of the first weekend. Pretty pleased with the start as I didn’t know what to expect going into it as I’ve only just got a new cue 10 days before the event.”

In pool, there are quite a few bodies around, but the main organization is the World Pool-Billiard Association (WPA) formed in 1987. This hosted the WPA World nine-ball and eight ball Championships.

Cooney says there are quite a few things that need to change in the sport if it is to gain more traction.

” I think if there was just one governing body, one tour, one set of rules and one set of equipment, the game would have a much greater chance of getting somewhere. In snooker, everyone knows the rules, the balls and the cloth they use. We go to pool comps in clubs and you could play matches throughout the day on different types of cloth etc – frustrating!”

He added: “But having said that what Ultimate Pool Group are trying to achieve is by far the best chance pool has. The events they put on are first class and its great to be a part of it.”

Playing either pool or snooker and trying to make it is as a professional is tough.

Cooney adds: “I played a few snooker tournaments when I was late teens, I did okay but at the time I never believed I could make it and wasn’t prepared to dedicate all the hours with the chance of still not making it… I know quite a lot of real quality amateurs who have dedicated their lives to snooker and still haven’t made it, or been on and off the tour. “

We asked Dom if there were a lot of pool players going around with coaches, like in snooker. He said that pool was more of a self-taught type game.

He added: “Pool can be self-taught to a degree.. but where snooker is more about repetition and playing a lot of the same shots over and over, pool is more about knowledge, really. I don’t really know of any top pool players who have a coach.”

We asked Dom if there was any funny moments he had encountered in his pool career to him personally, or that he saw and he told us about the moment from the weekend that had gone viral.

He said: “As recently as this weekend, one of the funny moments was live on TV in a pro pool match between Craig Lakin and Shaun Chipperfield. Craig was going back to his chair and as he went to sit down, he just caught the edge of his chair and fell over in the arena live on TV. Needless to say the clip went viral in seconds on social media

Finally, Cooney says his chief ambition this season is to keep his place in the Ultimate Pro Series of events.

We thank Dom Cooney for his time talking to SnookerZone and wish him luck on the UPS and pool career.