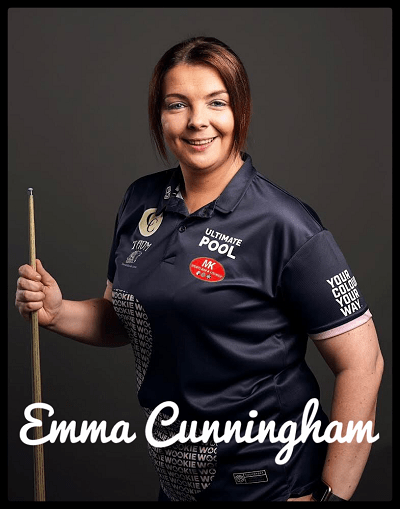 She told SnookerZone: “The Pairs Cup was so much fun. Amy Beauchamp and I have been friends for a long time and it was awesome to play alongside her for a change. One of my favourite events in a few years.”

She added when asked about whether she thought the Ultimate Pool brand could get big in the future as it continues to grow, she said: “Yes, I really do. The rule set is fantastic for all audiences and the players, and work the Ultimate Pool Team put in behind the scenes is outstanding. There is an all ladies’ series coming in 2022.

But not only is Emma a whizz around the pool table, but she’s also not a bad snooker player either. A while back she reached the quarter-finals of the Ladies World Championships and is always keen to practice on the bigger table as she says it improves her pool game.

But she loves the pool scene and co-owns a Sports Bar in Milton Keynes.

On her toughest opponent she has played in pool, she would have to say the 11-times World Ladies Champion Sue Thompson, now retired.

Here’s one of their encounters…

Emma runs a series of competitions locally and feels the competition in the ladies’ game is getting better all the time.

I feel our game has progressed massively in the last 5-10 years. The depth in the game is brilliant and the competition in the game is fierce. I run a series encouraging all players new and old, to compete. We all started in the same place. I feel if the game got more recognition, then it would open it up to a whole new audience and get lady players out there to see there is opportunity.

The lass, currently based in Northampton, but practices at Milton Keynes, has some great advice for anyone wanting to get involved in playing pool or snooker.

My advice for all young players is to practise as much as you can on the snooker table and watch the cue sport you play as much as possible. You learn so much from the sidelines watching other players’ styles of play. Lastly, don’t be disheartened by losing. Pick yourself up and go again. You need to learn to lose before you can learn to win!

Like most, she was introduced to the game by close family and got the bug.

My Nan owned a pub in Newry, Northern Ireland. I would play pool after school every day with my sister and the locals. My dad then took me to the Cue Club and introduced me to snooker. I would then go there every day.”

She then became serious and wanted to play all the good players to improve.

Things you ought to know about Emma Cunningham…

She has a sister who also plays, and a twin brother, as well as a 14month old standard dachshund dog called Chip!

Don’t forget, the Ultimate Pool Pairs Cup is around every Monday night on Freeview Channel 64 @6:30PM in the UK and is also available on the UPG website. It’s Week 11 of 21.

Check out ALL the action there, here – now…