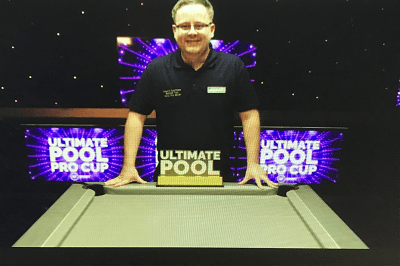 The Ultimate Pool Group created history this week as Ultimate Pool 8-Ball was broadcast for the first time on BT Sport TV in the UK.

New and old-time fans raved about the coverage.

The Ultimate Pool Professional Cup saw at least 48 0f the world’s best pool players pit their wits on the small table for the chance to scoop the UP Pro Cup and bank a £10K first prize with a spell-binding and dazzling few days of 8-ball from the 27th December to 30th.

Jordan Shepherd, who made a debut as an Ultimate Pool professional in the Ultimate Pool Pairs Cup a few weeks ago, managed to knock off four World Champions on his way to lifting the crown.

Described by himself as ‘the hardest tournament he has ever won’ Shepherd emerged as the winner of a major televised title at the Players Pool & Snooker Lounge – the opening event of the new 2022 Ultimate Pool campaign.

The 31-year-old Doncaster-based star returned on Thursday with renewed confidence having admitted he came into the tournament with only moderate expectations. In the quarter-finals he eliminated local hero Liam White in straight sets 2-0 (7-1, 6-4) and then followed that up in the evening session by ousting Jack Whelan in a compelling last four contest – also 2-0 in sets (6-5, 7-5).

Fans could follow on the Facebook feed for updates and results as fans raved about the coverage.

One said: “To everyone at Ultimate Pool what a job you have done for our sport.”

Another wrote: “Thoroughly enjoyed watching some class pool being played. Different gravy from these guys.”

And another wrote: “Taking pool to the next level. Keep it going.”

As the new season kicks into 2022, Ultimate Pool continues to grow with new events coming all the time, especially with events such as the Ultimate Pool women’s event later on in 2022.

Harriet Haynes, an avid watcher of Ultimate Pool and player as a 2 times Champion of Champion champion, and a snooker enthusiast, told SnookerZone: “Ultimate Pool Group have made brilliant strides in making pool unified under one rule set. I’m very much looking forward to competing on the 80 women strong event. Amazingly, 72 of those women get paid out at every event too. We’ve got Neil Toms as the TD again, who is probably the best TD in pool currently. He ran the WRPT last year, with wonderful success.”

Haynes, 31, from Faversham, will be competing in the new Ultimate Pool women’s event next season in 2022.

But she also competes on the snooker amateur circuit.

She added on playng in the new EPSB women’s tour: “This was the first time playing on the new EPSB Women’s Tour. It’s great that the English Partnership of Snooker and Billiards (EPSB) are investing in the women’s game (snooker). We had 12 players there both days, including a few new faces, which was fantastic to see. Been playing on the WWS circuit since November 2019.

You can see it live on Freesports on channel 64 and on the UP website as usual.

SnookerZone wishes everyone at Ultimate Pool a Happy New Year and prosperous 2022.