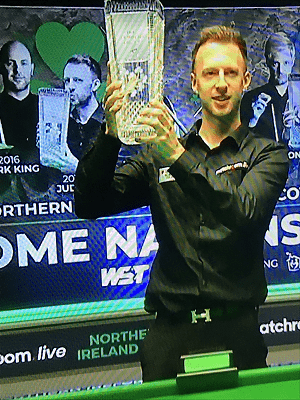 Judd Trump will compete in this month’s US Open when it begins on the September 13 – 20. The Ace in the Pack is used to the big lights of the big table in snooker, but will now pit his wits on the smaller table.

The Ace follows a long line of greats that have crossed pathways into pool such as Alex Higgins, Steve Davis, Jimmy White and Ronnie O’Sullivan.

Trump, like Selby, has created his own history in snooker, by being the first player to win six ranking events in a season, and, then follow it up the next with five!

Selby of course won the World 8 Ball in 2006, and then became a World Snooker Champion in 2014 and then won it another three times over a five-year span.

Selby, this week, announced he would be playing in the 8 ball pool event in the Ultimate Pool Series in England, as Trump crosses the Ocean to America.

Trump told Matchroom: “I think when I get over there and step out, I don’t want to make a fool of myself, that will add pressure. But in the snooker world, I know what I am capable of and I know when I put the work in I’ve got that belief whereas, in pool, I do not know what’s going to happen. Hopefully, I can have a good run in it.”

He added that for him; he wanted to take snooker over to the US and now is his chance to promote not only himself but also the game and create a new tray of fans.

Trump said further: “At the US Open, I’ve not come to take part, I’ve come to try and win the event. I’ve come to give it my absolute all and to see what I can do with myself, it’s something I’ve always felt I wanted to do, and see how good I can be at pool. I am not under the illusion that I will go there and blow everyone away. I know the breaking off and tactical side of things is going to be tricky for me. I know there’s a lot of things that can go wrong. Hopefully, I can just enjoy myself and pot all the balls on the table and not get into that problem.”