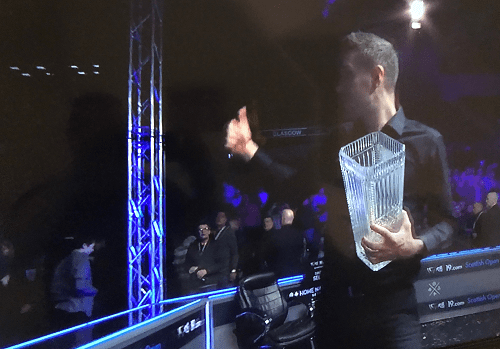 MARK SELBY landed the last ranking event final of 2019 and the last of the decade at the 19.com Scottish Open in Glasgow over the weekend.

The 36-year-old three-time World Champion defeated young talent Jack Lisowski in the final 9 -6 to scoop the 70K first prize and become the first player to win two Home Nations events in one season.

A few months ago he landed the English Open after a dry spell of winning no tournaments for a year or so.

Selby said after about his opponent 28-year-old Lisowski that it was only a matter of time before he would win a tournament as he said he is such a talent and makes the game look easy when it comes to potting balls from anywhere on the table.

[bctt tweet=”Lisowski in the post-match interview said he definitely needed to work on his safety game more but could take lots of positives from his seven days in Glasgow.” username=”@chrisgaynor2″]

Selby landed his 17th ranking title after knocking out the likes of Ronnie O’Sullivan in the quarter-finals on the way to his win.

Lisowski knocked out John Higgins and Mark Allen on his way to his third ranking event final.

🗣”Amazing. Obviously coming here this week even after the UK, I had a disappointing performance out there.” @markjesterselby reacts to winning the ❶❾.com #ScottishOpen title 🏆 pic.twitter.com/VeZ9MJbTwZ

The next major event will be in 2020 in mid-January at the Alexandra Palace in London as Judd Trump defends his Master’s title.