Elk tips are the most popular and well-known brand in snooker for cue tips. 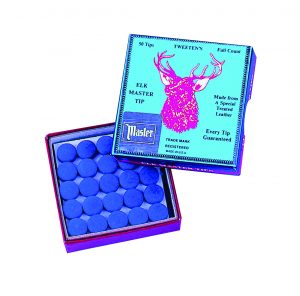 When you first start out, the chances are your first encounter with a cue tip will be an Elk.

Generally, the Elks are cheap to buy and a pack of 50 of them (on Amazon) can cost you less than 20 quid. They won’t break the bank if you’re starting out.

However, once you get into this great game, you will find you will want to experiment and like most mortals, we like trying out brand shiny new objects!

New tips come on the market all the time.

What Are Elk Tips?

You will probably find when you start playing that you will get a feel for the type of grade of tip you like playing with.

I prefer a “softer” cue tip on my cue, but it is all down to the feel and once you play snooker over a period, you will start to understand that feeling when you experiment with different cue tips and what’s right for you.

It’s difficult to describe but you will know it as you progress!

The main problem with Elks is the fact that if, for example, you buy a box of 50, you won’t know what kind of tips you are going to get in terms of soft or hard. It can be a bit of a lottery.

That’s why brands such as Century (see out article on the top three cue tips you must try, here), iron out that disadvantage and allow you to choose the grade of tip you like.

Having played snooker consistently now, I’d recommend starting with an Elk and then knocking it in for a while and getting a feel of the sound of it and as said earlier, you just start to get to “feel” for your preferred tip type.

Generally, a soft tip, the kind I like require more maintenance, and don’t last as long. However, they do generate more spin on the cue ball.

A hard tip requires less maintenance and lasts longer – but, to repeat, it’s down to your own preference!

The most important piece of advice SnookerZone can give you is once you have found a brand of tip you like, stick with it, and stop chopping and changing.

Of course, you will go through an experimental phase, but, once you find the brand and type you like – get on with the important thing and that’s playing and practicing your snooker and stop worrying about whether you’re keeping in trend with new tips!

That will come later when you build up knowledge and practice!

Watch as top cue maker John Parris explains a key tip in finding out how soft or hard an Elk (or any tip is) is in this video, below…

In a future article, we’ll talk about more brands of tips and what to look out for, so stay tuned…!