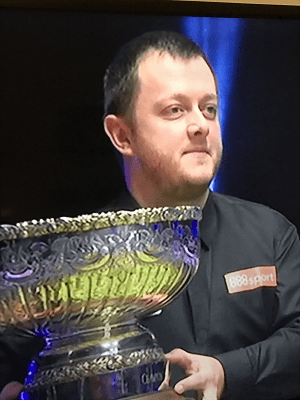 Mark Allen claimed his second major since his Master’s Crown in the 2017/2018 season.

The Marshall Arena in Milton Keynes has become a symbol of hope, inspiration, and entertainment during this unusual and unpredictable time during this Covid-19 pandemic.

Last week, it held the major event The Champion of Champions as 16 of the World’s best snooker players battled it out for the first prize of 150K.

Among them included Jimmy White, there courtesy of winning the World Seniors, and two other players, who had not picked up silverware, but were there because of their consistency in the rankings during the last season.

It would be ironic then that Mark Allen, a former Masters winner would go on to become the 2020 Champion of Champions and book his place for next year’s event as he had not won an event during last season.

The 34-year-old Northern Irish player had a tough draw to get to the final, defeating none other than six-times World Champion Ronnie O’Sullivan, and, then, seeing off World number one Judd Trump, before meeting the two-time winner Neil Robertson.

In the first session in the afternoon, both players opened their accounts with a ton, as the end of the session ended with Allen just edging the Thunder from Down Under – 5 – 4.

At the opening of the second session in the evening, it looked like Allen had a new lease of confidence as he took the opener with an 81 break, but Robertson soon hit back.

However, Allen’s newfound determination saw him after the interval go two clear again with a break of 119 and then in the penultimate frame a break of 70.

The last frame is always the hardest to win, but Allen made light work finishing the match in style with a 112 break and a fiery clank of the black to end the match and lift the Crown 10 – 6.

“Beating the world number one, two and three in succession to win a big tournament like this, it’s what we play for,” said Allen.

“A few splits here and there and that could have been a lot closer, because Neil didn’t look like missing when he was in.”

He added: ““My dad will definitely be watching. I don’t think he has stopped smiling since I won the Masters so this is like a new smile for him. He’s a very proud father and I’m a very proud son, so this is for him but it’s also for a lot of people who support me along the way.”

He said to ITV4 after that if he’s winning one tournament a year he’s happy because nowadays it’s tough with so many good players around.

He said the likes of Ronnie, Neil, and Mark Selby make winning look easy, but “it’s REALLY not.”

Stephen Hendry, seven-times World Champion, said that based on Allen’s performance at this event that he could be a serious contender for Sheffield next year. However, he said that Allen wasn’t consistent enough, but based on this, he would be a serious threat at The Crucible.

Hendry joked: “I tipped Allen to lose against Ronnie and Judd, AND Neil. Just shows you what I know about the game.”

Back in 2015, Allen had missed out on the Crown to Robertson, so it was a case of sweet revenge from five years ago.