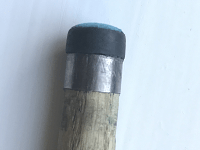 SnookerZone had fitted from Cue Craft in Worksop a 9.25mm Titanium ferrule on his Cue Craft cue after having a brass 9.2mm ferrule on there.

The staff there said that fitting the ferrule initially meant that 10mm had to be cut off the cue. In general, most cues measure 57 inches in length, and my cue was around that. So, now, my cue measures around 56.5 inches. Cutting the 10mm off was due they said to the width of the ferrule and the spigot, and they range from 9.0mm to 12mm.

For some, having mm chopped off their cue might be a problem in terms of cueing up at the white and making the cue shorter and shorter. There must be a way of overcoming that? Maybe that’s something for future inventors to consider?

My coach, Brian Cox, said that when holding the cue, you normally hold it “two hands” from the end of the butt. Obviously, when your cue gets shorter, you may well have to re-adjust where your bridge hand may position itself. That’s normally “two hands” away from cue ball as well.

On initial inspection of the ferrule, it’s light in weight, but, like Century Pro Cue Tips, the ferrule is presented in a well-crafted rounded box with the size of the ferrule printed on top. 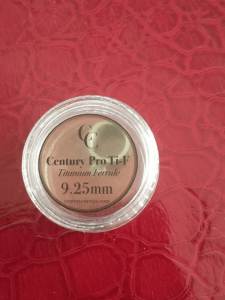 Don’t be fooled by the lightness of this…

Titanium is not nicknamed a Titan metal from Greek mythology for nothing! This monster of a metal is strong and will outlast a metal such as brass due to its durability. 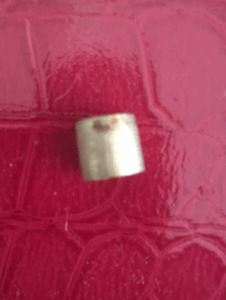 In fact, you can see how tired and worn the old brass ferrule looks (see pic above) compared to the new Ti ferrule now fitted on the cue. (See pic below). 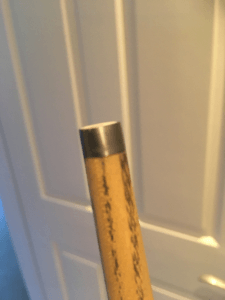 Generally, Brass ferrules are cheap. On the Cue Craft website, a brass or stainless steel ferrule can cost from 50p to £1.

However, due to the fact that brass doesn’t last long in terms of its colour and general wear, you may well be replacing a brass or stainless steel ferrule more often, depending on how often you play, of course.

Titanium is an expensive metal (the ferrule is £20, but, you’re looking at the longer term benefits of the ferrule not wearing down as quickly. We’re talking years here.

How Does the Century Pro Ti-Ferrule Play?

On an initial knock of the balls down the club on Saturday 28th July, there seemed to be a heavier clunkier sound in contact with the cue and the white. Whereas with a brass ferrule the sound appeared much to be a “lighter” less heavy sound.

The ferrule seems to give you greater cue ball control, but that may be just down to my game improving all the time. It has a much sturdier feeling when you strike the ball. and It appears much heavier on contact. It is a strong metal, after all!

The other thing I noticed is when you’re playing fine cuts, there seemed to be less deflection and the ball went where you wanted it to go. There is a more positive reaction on shots!

I think the main advantage of the ferrule is the fact that it will last longer than brass, and you won’t have to “maintain” it as much as brass or stainless steel. Tips seem to sit nicely on it as well, and to me, just look better!

What Do Others Think?

Some on forums have said the new Titanium ferrule is another “gimmick.” Others think there’s merit in it.

One person on The Snooker Forum, said: “There is some merit with what they’re doing (Century), the snooker crazy YouTube page showed a ferrule that was a different diameter at the bottom compared to the top. All it takes is wire wool to get scratches out of brass, but there’s truth to it that the wirewool does over time wear away at the ferrule. Matthew Stevens (old) cue for example was extended numerous times as he liked to polish his ferrule and it ended up changing the diameter of the wood, the shaft had to be cut down to maintain the tip diameter.Replacing a ferrule doesn’t always necessitate having to make do with a slightly smaller tip diameter or having to lengthen the cue to maintain your original tip diameter, but sometimes it does.

Dunn, very nearly a Crucible qualifier in the 2017/18 campaign after losing to Graeme Dott in the final qualifying round at the English Institute of Sport in Sheffield, has given the new ferrule, the first of its kind in snooker, a whirl alongside his Century Pro Cue tip Grade 4 for the new 2018/19 season.

How the idea Came About for the Ti-Ferrule

The ferrule, which is made of a special grade of Titanium alloy – strong and resistant to corrosion, is the brainchild of Andrew Colgrave, who explained how he came up with the idea for the product in June when it was just about to launch, and talking to me on Blasting News, he told me: “It mainly came about as a direct result of measuring brass ferrules to see how they change and deteriorate over time. We noticed that after as little as 10 tip changes a standard brass ferrule would start to taper inwards, due to tip installation techniques, burnishing the tip sidewalls and re-polishing the ferrule. In order to get a snooker tip playing correctly, it needs to be installed a certain way, which includes burnishing the side walls to strengthen the tip, doing this technique cannot be carried out on brass ferrules as it has a negative impact on them. So, if you play with a 9.8mm ferrule you could lose as much as .5, so the ferrule will go down to 9.3mm!”

Dunn wrote on Facebook on his initial thoughts of the Ferrule: “Titanium Ferrule , G4 Century tip , Ok the future is here , I guess for over a 100 years we’ve all used brass ferrule’s , I’ve just had a titanium ferrule fitted by Craig Fitzpatrick at Green Baize , first impressions : hardly any throw with side, It is lighter than brass on the scales but I can’t tell the difference, feels great so far and won’t wear down when re-tipping no-where near as fast as brass. Contact Stu Green at Green baize for prices.”

Brass is a compound of copper and zinc and is generally used for deco rational purposes because of its shininess and similarity in colour to gold. However, it has the tendency to wear down over time and needs to be re-polished every so often and can even discolour.

According to Colgrave, using Titanium will mean less work on maintaining the ferrule and less corrosion.

Companies who are fitting the ferrule are the likes of Cue Craft in Worksop, Coutts Cues in Lincolnshire and Chesworth Cues who have a branch in Sheffield.

On the Century website, it reads about the new product: “Sporting standards are continually improving as advances in training, technique, and application are developed and introduced. However, unless the equipment used keeps pace with these changes, progress becomes impaired or even stops.”

Titanium is high in strength and low density – and was named after the Titans in Greek mythology.

Colgrave added of his ambitions with his new snooker product releases: “My dream is to bring 21st Century tech into the marketplace coupled with long-held traditional values and cue making standards.”

Head here to get fitted up with a Century Ti-Ferrule!

Or head to one of the Stockists such as Cue Craft!

PS: Have you had a Century-Ti Ferrule fitted on your cue? Let SnookerZone know what you think! You can email us on info@snookerzone.co.uk and we can include your comment on the site. Keep it clean, please!