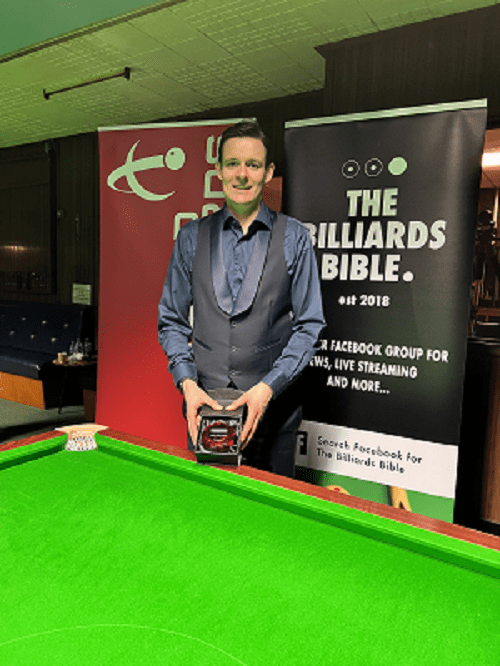 SnookerZone caught up with the new Jersey Open winner Darren Clark, who has plenty to share about the growing and more attacking game of billiards in 2022. You might even see him and a few others on the TV soon! Watch this space…

Darren Clark first started playing billiards when his dad, Michael, introduced him to the game, and, like with so many who get introduced into cue sports, he became hooked.

The 39-year-old first played in the Teeside Boy’s Billiard League, which was home to many of today’s top players in the game, and has even had long practice sessions with the renowned Peter Gilchrist.

Said Clark: “I would go into the club whilst it was closed to practice and would often practice with some of the older guys who would give me advice on my game. I couldn’t get enough of it in the early days.”

He added: “My Dad was a Billiards player and coached the local team (Eston Institute) so I got involved in it that way. It was (and still is in some senses) very big in the area.”

In the Boy’s league, aged around 17, Clark scored an incredible 303 in 30mins, quite some feat for a kid of that age.

He said: “I remember beating World Champion Lee Lagan in a handicapped Billiards knockout match when I was only young. He was no doubt giving me a healthy start, but it was still a highlight all the same. I stopped playing for around 15 years at the age of 19 or so.”

But, for Clark, the win in Jersey will always be the highlight for him and, partly, that would be down to spending hours on the practice table learning from the best. Clark says if you want to learn to play billiards, you can do no wrong by watching lots of matches on Youtube and following the likes of Gilchrist and co.

He added: “I was lucky enough to spend 2 or 3 months practicing with multiple World Champion Peter Gilchrist recently. We played at my house for maybe 5 or 6 hours a day, 5 days a week, and I learned a lot from him. Getting coaching and advice from someone like Peter is priceless really and many wouldn’t get that opportunity. I guess it’s the same as going to your local tennis club and playing with Federer every day for 2 or 3 months! Sooner or later, something had to rub off!”

Clark said if you want to experiment with billiards, you need to understand and recognize the half-ball shot. That’s the starting point to it all.

“In the by-gone era, the likes of Willie Smith and Tom Newman would run the red ball around before they played to get their arm going, so if it’s good enough for them, he said…”

The man originally from Teeside, now located near Wetherby in West Yorkshire, who works in design, but has also worked in the betting and gaming industry, said that billiards is making great strides in becoming a much more entertaining sport to watch now. It has become more attacking. In fact, billiards is similarly following in the lines of pool with the Ultimate Pool scene, making the game far more attacking and entertaining for TV audiences and fans.

🏆 WORLD MATCHPLAY | We are delighted to announce details of our much anticipated World Matchplay Championship which will take place in Ireland in April.

The event will be preceded by the Irish Open at the same venue.

He added: “We’ve got the short-format World Championship in April in Carlow, which is played with modified rules to encourage attacking play, and it’s also over 100-up frames. So, it’s a bit more explosive than say a timed event. There’s lots planned for World Billiards, and we’ve got a few things in the pipeline that I think people will be excited by. You might even see something appearing on TV soon (watch this space).”

When SnookerZone interviewed Peter Sheehan, another billiards player, he teased us about the fact that 2005 World Champion Shaun Murphy was a keen billiard player and would be suited to it, as would Ronnie O’Sullivan.

Read that interview here – after…

Clark added: “I know that Shaun Murphy is a good billiard player. He’s made a 300+ break. He and Ronnie have probably got the most suited cue action, I would say. Aonghus McAnally, a fellow board member (and all-around legend) is trying to set something up with Shaun on the Billiards front, fingers crossed on that one!”

Clark recounts a game he will never forget with a prolific cue sports player from India.

“A good memory, other than some of the more recent stuff, was when I played Alok Kumar in 2018 in Leeds over 45 minutes. It was in the Jim Williamson Open, there was around 10 minutes or so left, and I was trailing by around a hundred. I managed to make a break of 154 with my last visit to win the match. Alok’s a great player from India and has excelled at most cue sports. Before that break, I’d scored very little in the rest of the match, so it was nice to pull that one out of the bag!”

SnookerZone, like many cue sports fans, would love to see some billiards on TV, and a new attacking version of the sport.

Thanks to Darren Clark for talking to SnookerZone…

Watch Clark in action below…