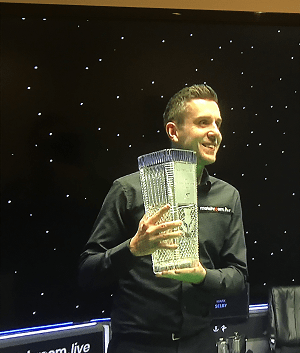 JESTER FROM LEICESTER MARK SELBY claimed his second ranking title of the season at the Scottish Open played in the now familiar venue of Milton Keynes during this Pandemic.

The 37-year-old three-time World Champion had been cruising along in his matches all week and met up with his old rival, the current World Champion Ronnie O’Sullivan in the final.

Selby is one of the few players who can “torture” O’Sullivan with his combination of grind-out snooker and heavy scoring and in this match, it started off with Selby being 3 – 1 having made a ton on his way to the mid-session interval.

O’Sullivan, who had had a proper battle with the Jester at The Crucible in August, had been in “below par” form by the standards we are accustomed to seeing from the Rocket.

In the eighth frame, it looked like Ronnie was on to trail by two at 5 – 3, but an out of character easy missed red by Ronnie’s standards meant that he would trail by four frames going into the evening session.

It was Selby’s dominance in the afternoon that sealed the deal for his evening victory as he steamed ahead 7 – 2 with Ronnie still looking below par with breaks of 78 and 51.

Eventually, a 76 break in the last was enough for Selby to claim his second Scottish Open title and be the second player along with Judd Trump to successfully defend a Home Nations title.

O’Sullivan said after the match on Eurosport that he felt he played OK – despite the fact he doesn’t do as much practice.

The Jester, who picks up 70K, said it’s always good to test where your game’s at against the best like Ronnie, but admitted he didn’t feel like he had played as well in the final as he did in his other matches, especially in his semi-final against the good run of Jamie Jones, whom he blitzed 6 – 1 with a barrage of big breaks.

China’s Li Hang also had a good run to reach his second ranking semi-final and was 4 – 1 up on the Rocket before a lapse in confidence and focus to get over the line meant Ronnie was able to come back and claw his way to the finish line.

He also said that at times he felt like he was “searching for a cue action.”

He said after on Eurosport on his confidence when playing O’Sullivan: “Every time I go out there, I believe I can beat him.”

Mark Selby’s determination, like Judd Trump and Neil Robertson is clear as he will be going back to the practice table before his World Grand Prix.

He paid tribute to his coach Chris Henry whom he said had worked on a few things with him. He thought he needed some technical alterations, but it was more “mental” and Henry had shaped him up in the right frame of mind.

He added: “I am a perfectionist, and if I’m not doing something how I want it to be, then I get down on myself. I’m always striving to get better. I’m not getting any younger, but there is no reason while you are healthy that you can’t try to get better. That’s what I’m aiming for so I will still be back on the practice table tomorrow working hard for the World Grand Prix.”

The World Grand Prix is the final event before the Christmas break and is live on ITV4 this week.