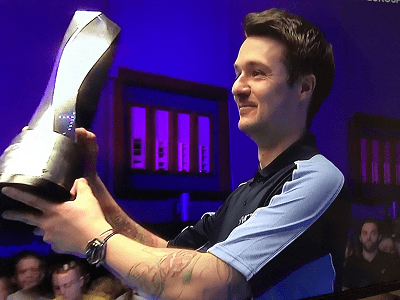 Michael “The Hitman” Holt landed his first-ever ranking title at the 2020 BetVictor Shootout at the weekend, 24 years after turning pro.

The 41-year-old has now erased his name off a list of older players good enough but never to have yet won a ranking event, as he saw off China’s growing talent the young 22-year-old Zhou Yuelong in the final.

Holt becomes the 30th player to have won just ONE ranking event.

The madness of the Shootout brought real drama and tension throughout its four days as Holt also created Shootout history by getting to the final two years in a row. Last year he was runner-up to the Thai speed King Thepchaiya Un-Nooh.

It was a good run for the Chinese players in this year’s event as three of the four semi-finalists were from China with only Yan Bingtao being the only one to have won a ranking event on the list.

Zhou had made it through to another ranking final, bouncing back from his 9 – 0 drubbing by Neil Robertson at the European Masters in Belgium a few weeks ago.

Holt’s win in the Shootout meant he had thrust himself into the Players Championship in Southport, and, also knocked out Ronnie O’Sullivan who was sixteenth on the list. That means Ronnie O’Sullivan will NOT be defending his title this week.

He added he thought the reason he has “success” in the event was that he didn’t have time to think and plays on instinct whereas in the normal snooker format he overthinks.too much, and he said at the Shootout he just plays.

The Nottingham man also joins a growing list of single ranking event winners in the past three years including the likes of German Masters champion Anthony Hamilton, Northern Ireland Open winner Mark King, and German Masters winner Martin Gould, all who broke their ducks and got the monkey off their backs.

Holt also added: “If I can just be the best I can be, I’ll be alright.” He was talking in relation to kicking on from winning his first and achieving more success in the sport.

24 years of hunting for a ranking title… over!

On winning the Shootout, Holt has landed a Champion of Champions place in November after bagging the 50K ranking points in Watford.

The Shootout also had some real drama in earlier matches where, in one match with rookie tour player Brandon Sargeant, he was 63 behind and fought back with a 61 before the frame went to a black ball fight which saw Sargeant steely knock in the black to win the frame! It was one of the best comebacks in a snooker frame, considering the pressure of the shot clock and the noise of the crowd, not just in the Shootout, but in snooker history.

WATCH THE VIDEO BELOW NOW…

There were also some great memories for another recent pro “rookie” Billy Joe Castle who knocked out the Rocket Ronnie O’Sullivan in the earlier rounds.

Loved the snooker shootout again this year enjoyed every minute of it and took a way some great memories #SnookerShootout pic.twitter.com/AQtJR7u11I

There were also four tons in the event, as Rory Thor managed the highest break of 133. Two of the Chinese players Chang Bingyu and Xiao Guodong, a former runner-up in the event also had a ton. Jak Jones had the other.