Thinking of heading to the World Snooker Championships next year in Sheffield?

SnookerZone has been to Sheffield now for the past four years to watch the World Championships and the Qualifiers at both Ponds Forge and the English Institute of Sport live, and this page is a dedicated guide to the ins and outs of what to do, where to go, and how to navigate your way around the City.  There will be everything from guides on where best to eat, drink, and of course, how to make make the most of your time there. The page will also be updated regularly to add to. If anyone has any recommendations from their own visit, then feel free to email SnookerZone and we’ll include it in the feature.

Believe you me, once you get there, you will have a ball – if you’re a dedicated snooker fan – of course. #SnookerCity

Going to a City and arriving there from the Train Station for the first time can be a daunting feeling. We know this because we’ve done it ourselves. In fact, we’ve been to foreign countries before on our own and know that it’s a real nervy experience when it’s the first time.

Now, the first thing to point out with an event like the World Championships in Sheffield is this…

[bctt tweet=”Believe you me, once you get there, you will have a ball – if you’re a dedicated snooker fan – of course. #SnookerCity” username=”@chrisgaynor”]

Sheffield, since 2011 holds a population of more than 550,000 people and is steeped in history from the steelworks and forge masters. Aptly named “Steel City” the Crucible has also played its part in producing “steely” snooker players as the up to 1000 capacity venue hosts the World’s greatest and best potters in the game since 1977. History aside, the venue is neatly organised so once you are there, you will have no trouble finding your way around. Here at SnookerZone, we’ll give you a head start as a first-timer, so you know what to expect when you get there!

THE INCREDIBLE THEATRE OF DREAMS…

Just opposite the Crucible Theatre is the Winter Garden, which hosts the Cue Zone where you can try your hand at the game, and, also, enjoy watching the buzz of the World Championships in full action as the BBC broadcast live there.

FANCY A PINT BEFORE WATCHING THE SNOOKER? 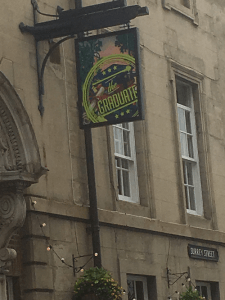 Just a few stops down from the Winter Garden is a pub aptly called the Graduate – just off Tudor Square. As Sheffield is predominantly a student city, buzzing with students, naturally, the cost of a pint in the City is cheap/ish compared to normal. Obviously, it depends on what you order, but a pint of say, Carling in the Graduate was about £3.30! Very reasonable! However, for an even cheaper pint in the City, then head to the Banker’s Draught, Wetherspoons pub just out of the main city centre – and there, you can guzzle a pint of lager for £1.99! Many of these pubs also offer meal deals and for just over a fiver, you can order a burger and chips and a pint…

The Crucible Theatre is a short walk from the City Centre where there is the usual hustle and bustle of the City folk and there’s plenty of shops to look around and generally soak up the atmosphere when the snooker is in full flow. If you’re on a budget, you can survive there for longer than you think and still enjoy the odd treat here and there…Greggs is a reasonable budget choice for a bite to eat at lunchtime and for under a fiver, a baguette and tea is ample.

We’ve stayed in three hotels since visiting Sheffield. These are:

This hotel is just outside of the City Centre and is just opposite the Ponds Forge International Sports Centre where the World Championship qualifiers were held a couple of years ago for a while before they moved them to the English Institute of Sport. The hotel is very similar to a Premier Inn and comfortable enough for a short stay if you’re just there for a couple of days or so. We stayed in there for six days but felt it may not be right for that amount of time. The hotel is literally a five-minute walk to the Crucible Theatre and Winter Garden (if not that!). Make sure you add their FULL English breakfast to your booking so you don’t have to fill up too much during the day! If you can’t get in the Ibis, there’s also a Travel Lodge next to it as well.

The Jury’s Inn hotel is on the other side of Sheffield, (the better part in SnookerZone’s opinion) and is an “upgrade” if you’re looking for a slightly more “upmarket” stay. It’s a little bit more expensive as well than the Ibis. We’d suggest booking early as a lot of the Snooker stars and officials stay in this one. It’s just a slightly longer walk to the bustle of the Crucible than the Ibis, but, only just!

The Premier Inn Sheffield Arena is two minutes away from the English Institute of Sport. Yes, you can watch snooker all day and night and stroll back to a comfy hotel in just two mins. If it’s pure snooker you’re after, then this is the ideal trip to Sheffield. Book early. The good thing about the World Championship qualifiers from SnookerZone’s experience is you don’t have to book tickets for the venue. Just turn up! From the last time we went, it was £12 to watch quality snooker all day!

If you do go, ENJOY the snooker!

For tickets (they sell out quick!)…

PSS: The atmosphere outside the Crucible with the Big Screen TV is so good as well, and even if you can’t get tickets to go inside, you’ll enjoy the buzz of the venue just as much outside as inside! Make sure you go STAR SPOTTING! What with the CueZone a stone throw away – you’ll have plenty to do and see around there!