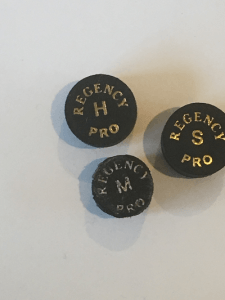 There are many layered snooker tips on the market and SnookerZone has reviewed some already such as the TSF snooker tip and the Taom Pro tip.

They all have their unique features to their brand and play well. However, as you grow into the game of snooker, you will discover that you, as an individual player, will strike up a love affair with a certain kind of brand of tip and you will be reluctant to change because you get used to the feel and the play of it, and your mindset believes it is helping to improve your game (sort of).

SnookerZone makes no disguise of the fact he loves the Regency Professional Cue tips by Mike Henson and since using them, whether it’s a natural improvement, they seem to suit his game. This is what we’re saying about falling in love with a certain brand of tip. You get very reluctant to try out new ones, but this is part of being a reviewer here at SnookerZone.

Note: We have two cues. One that indeed has a permanent Regency tip on it as our go-to tip, and, another cue to review all other tips of other brands.

However, that said, the new Regency Professional Cue Layered tips were kindly offered for review by Mike Henson as well as his new Blue tips, which we’ll be reviewing soon. They are the third tips in his series.

On to the layered tips…

As per the Regency Pro tips that we reviewed previously, the layered black ones come in 9,10, and 11 mm in…

Just choose your grade and you’re good to go!

Henson told SnookerZone he believes with his series of tips he has now catered for every standard of snooker player. Henson plays personally with the Regency layered one and used to play with a Kamui.

He added: “I can say it’s the best tip I have ever played with but you can judge for yourself.”

What is it you want from a snooker tip? Snookerzone believes you want…

The one thing SnookerZone likes about the RGP’s is the sound when they strike the cue ball. Some tips can make harder sounds than others. The RGP’s are very “soft” on the ear.

There were no problems with screwing back. We played with the Taom version 2 chalk to see how it held on the tip, and just as before there was a nice even coating. One thing SnookerZone noticed with RGPs is you don’t have to chalk every shot as the chalk holds well. On some tips, you need to keep chalking to keep the grip on the cue ball on every shot.

You, of course, should chalk up every shot! But don’t panic if you don’t!

Now, the only dilemma for SnookerZone is, which RGP tip does he put on his main cue!?

For ease of putting on the tip, we give the Regency Professional Layered Cue tip, FIVE STARS…

For ease of maintenance, FIVE STARS…

As with all of Henson’s Regency tips, you get a FREE tip trimmer style pencil sharpener, which is handy for quickly trimming your tip.