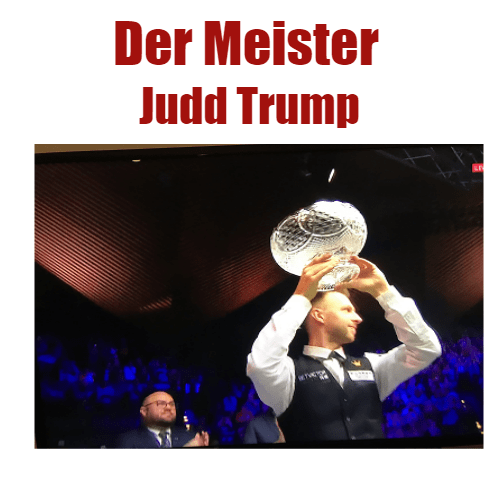 Judd Trump has bagged his 15th ranking title in Germany and his seventh over 12 months and his fourth this season in 2019/2020.

The Ace, 30, defeated Neil Robertson 9 – 6 in the BetVictor German Masters in a thrilling final as it saw Judd get some revenge for being narrowly beaten in the Champion of Champions final last year.

Robertson, 37, who was on to win back to back ranking titles after winning the European Masters just over a week ago, couldn’t overcome Trump’s safety in key frames as Judd won most of the tactical battles.

At four each it was looking perfectly poised to go all the way, but Judd went up a gear. He managed to finish out the match in style with a ton in the last frame he needed to bag his first German Master’s title.

So far, this season, Judd has bagged:

Only Stephen Hendry has performed better in a season after winning the World title at 21 in 1990 where he won five titles.

In fact, the six-time World Champion Hendry could have won six that season after winning the first World title as he was runner-up in The Classic, losing to Jimmy White in the final.

But Trump definitely has the game to win at least one more ranking title this season, which could, you never know, be his second World title!

Robertson paid tribute to Judd after and said: “sometimes, you have to hold your hand up and say well played.”

Will they or won’t they play in Shootout?

Trump said he thought his safety was top-notch, and he said you have to make sure your game is tight as you know that Neil can clear up when in.

The £150,000 for coming top in the BetVictor series is still on for both Judd and Neil if they decide to play in the Shootout.

Judd said he wasn’t sure if he’d play in it although he joked he probably would just to take the money off Neil. Had Neil won he would have been guaranteed the bonus.

Fantastic win for me in the German masters against Neil, so tough to beat. 😁 pic.twitter.com/8hZ96NoWwu

There is no rest for the wicked as the Coral series of events gets underway this week in Cheltenham with the World Grand Prix and, yes, that man of the moment Judd Trump is defending the title!

You wouldn’t bet against the Ace to go all the way again at the races.