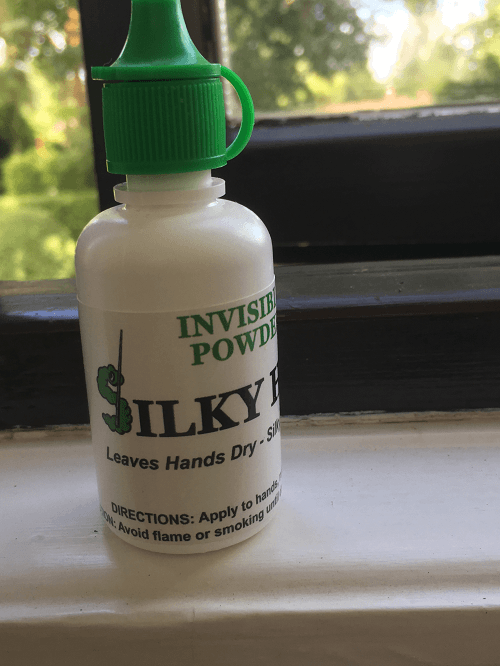 They designed this product to make cueing much smoother when running your bridge-hand down the cue. But for this review, we wanted to focus on a problem that we’ve had since the year dot when playing snooker.

The medical term for sweaty hands…

Did you know, the medical term for sweaty hands is Palmar Hyperhidrosis. It affects 1 – 3% of the population and is usually in both hands. It begins in childhood and can be genetic. But it can also be picked up later on in adults due to stress or anxiety issues.

You may find that a simple spray of antiperspirant (yes, deodorant spray) will do the trick, but, if that doesn’t, then you may need to seek other remedies. If it’s really bad and nothing you’ve tried works, then consult your GP.

Try this. (note: we’re not an affiliate of this product..)

But, before giving you the lowdown on sweaty hands related to snooker, we want to make people aware of other things you can try before trying Silky hands to try to help reduce sweat when playing snooker.

You could get a glove (or even two for both hands). We tried that. The only problem we found with a glove is that on the hand where our hands sweat the most, which is the hand we hold the butt of the cue, we felt the cue was slipping offline on shots. But for you, a glove may work!

You could use talcum powder. Some professional players have used talcum powder, and, although we’ve not tried that, we think that option is a bit messy as you don’t want to have your hands covered in white mess, as well as the surrounding space.

The only other option was to try this Silky hands cue lotion. Like anything, I was sceptical when I first saw it, but it’s a problem SnookerZone has suffered from since the year dot. Even our coach noticed we perspired a lot and suggested we try something to reduce it!

Silky Hands is simple to apply:

It comes in a 1 oz or 2 oz bottle and is simple to use. All you do is shake the bottle well before use. Apply some of the lotion before playing and rub well into the hands.

Immediately, you will notice your hands feel a little weird. It feels like you’ve applied perfume as it has a sweet scent on it when you smell them. They do dry quickly though!

Now, to the important question: Did the hands feel less sweaty when playing?

However, this invisible powder, as it’s described, will not totally rid you of sweaty hands.

It may do if you’re the person who doesn’t perspire that much, but, if like me, you sweat a lot, then it’s unlikely to rid you of sweating totally.

Our hands did feel less hot and much drier though. It helped with holding the cue to not feel like the butt was totally dripping wet with sweat. We were able to run our bridge hand down the cue much easier and didn’t feel uncomfortable on pressure pots when we played frames with someone over the weekend.

If you’re looking for a less messy alternative to Talcum powder, then this is for you.

SnookerZone would recommend trying out gloves before you do this though, as that may well suit you. For us, it didn’t. But everyone is different.

Shop for Silky hands or a glove today…