Stephen Maguire and Mark Allen met in the final at the Marshall Arena in Milton Keynes.

Both came through the earlier rounds of the Coral Tour Championship, full of beans.

Previously, 39-year-old Maguire had racked up six of the best.

As Mark Allen had passed his flying colours beating the Mark Selby test.

The final started tentative and nervy as they went in even stevens at four all.

it was Maguire who set out the evening stall.

He came out all guns blazing in the evening with a high break of 139.

The next frame he won took a bit more time.

His six tons record in a best of 17 was equalled by Shaun Murphy.

But ol’ Stevie didn’t care because he was sitting in one of the two final chairs. 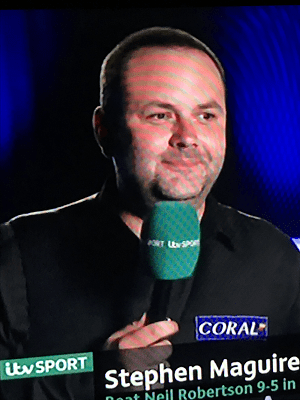 As Allen stole the frame with a 64, to the anger of Maguire’s rage.

The Glaswegian went into the mid-session two frames up 7 – 5.

Leaving Allen a bit to chew over in the snooker bubble player’s hive. 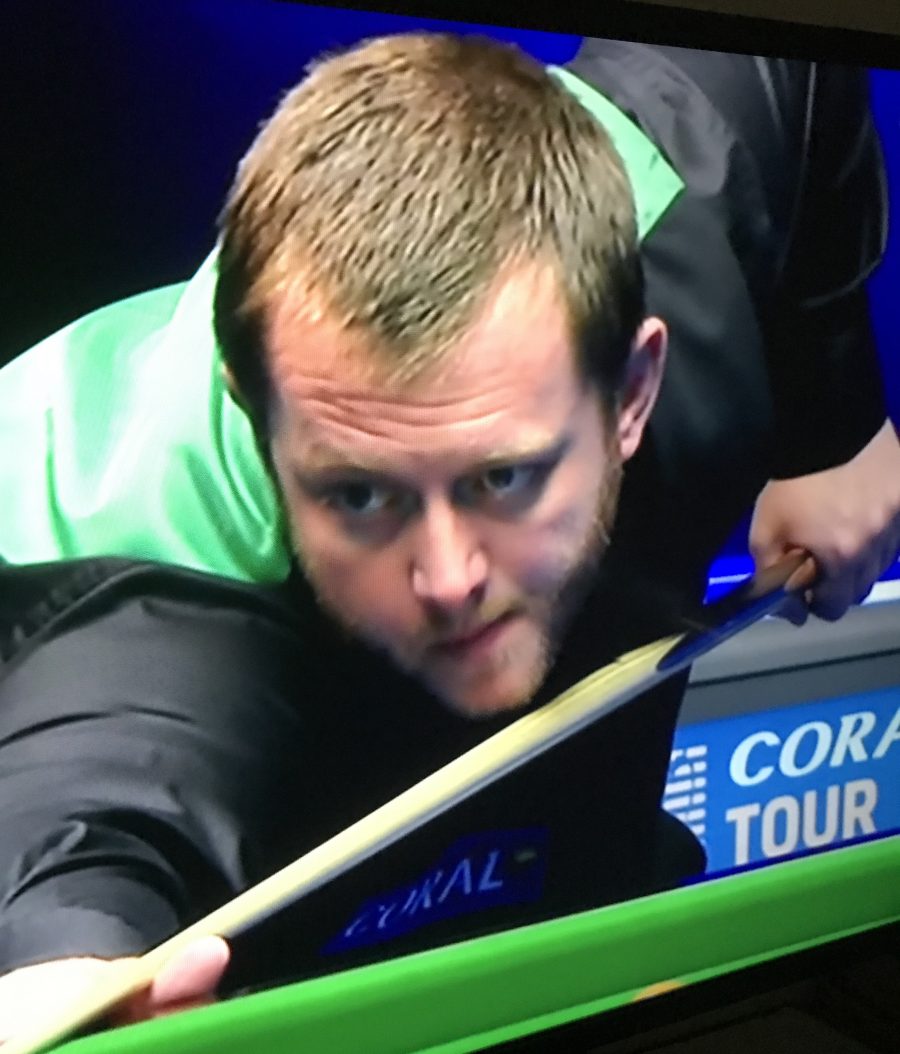 ‘He wants it’ does Stevie rubbing his hands with glee.

Stevie got in after the interval and made a cool 79.

Allen wondering if it just wasn’t his time.

Stevie was a replacement for Chinaman Junhui Ding

And getting all the way to the final he would earn some serious bling.

Allen got in in the next to make a ton but was on for a 140 to beat the high break but missed to the pleasure of Stevie.

They both had a chuckle but pocketing an extra 10K for the high break isn’t a jokey.

Just under 50 mins and it was a sweaty 16th frame, and it came down to the colours.

Tension in the air.

Both were snookering for England, trying to outwit the other.

As the finish line came near for Maguire, he needed pink and black to take 260K.

He ended up too close to the black but coolly potted it to make it his biggest payday.

Modest Stephen said after to Rob Walker he had flipped his way to the title.

Don’t be so modest Stephen, now performing in Sheffield is even more vital.

He’s looking forward to the cauldron at the Crucible.

For him, a win there is now very doable.

He said he needed a new pair of socks now he’s bagged some dough.

As he lifted the trophy above his head, with an almighty glow.

He’s known as the Pistol…

Because when he gets going he can fire off frame after frame quickly and leave you with a mountain to climb in the match.

The 34-year-old Pistol hammered Selby 9 – 2 needing only two frames in the evening session to book his place into the last two.

The damage had been done in the afternoon session when Allen jumped out of the blocks winning four frames on the bounce with a barrage of breaks over 50.

After the mid session, Allen took the foot off the pedal just slightly but still raced into a 6 – 1 lead.

Selby won the first of the evening but too many unforced errors led to Allen closing out in just over an hour.

One of them will be red hot for the Crucible…

After, former World number three Neal Foulds said that whoever wins this event will be red hot for the Crucible next month.

He added on Allen: ‘He’s dangerous.’

And Alan McManus said Allen is a powerhouse scorer, a quick scorer.

Mark Allen said: I think the reason Mark didn’t get going was because he didn’t pot a ball in the first four frames.’

‘That’s something that’s difficult to do against anyone especially someone like Mark,’he added.

He was just cold.’

Both Allen and his opponent Stephen Maguire,who made six tons in a best of 17 as a joint record with Shaun Murphy will be playing for a chance to get into the Champion of Champions event later on in the year.

It was billed as a cracker…

But ended in a one horse race in the end.

Judd Trump ran out a 9 – 4 winner against the four-times World Champion John Higgins at the Coral Tour Championship in Milton Keynes at the weekend.

After a rusty first four frames from both in an afternoon session, Judd took an early 3 – 1 lead and ended up going into the evening 5 – 3.

But the 30-year-old Ace in the pack only managed a high break of 60 in a frame where he needed a clearance from 53 points down to land a blow on the Wizard of Wishaw, who looked out of sorts like many players returning from the confines of lockdown the past three months.

The Juddernaut  started to motor…

in the evening session Judd soon started motoring into gear and a made a 128 to go 8 – 3 up before Higgins compiled an amazing clearance himself to keep his hopes alive.

Unfortunately, too many missed opportunities meant Higgins let Trump off the hook and Trump sealed the deal in the thirteenth frame to book a place in the semi-finals.

Trump said of his win and of his clash with Maguire: ‘I can only get better from that, he (Maguire) can only get worse…’

Talking after, Judd said he was happy with his performance and on his semi-final with the in form Stephen Maguire, he said that every match is different and it would be difficult to play like that again.

‘Hopefully we can meet somewhere in the middle,’ as Judd cheekily smiled after.

Trump is two away from being the second player to make a 100 centuries in a season as he is hunting to beat Neil Robertson’s 103 made a few years ago.

In command now over the class of 92

Judd Trump is starting to dominate over the class of 92 players such as Ronnie O’Sullivan and John Higgins, whom he had comprehensively beat in the World Championship final last year.

Stephen Maguire fired in a record six tons for a best of 17 on his way to a 9 – 5 win over Neil Robertson in the Coral Tour Championship in Milton Keynes over the weekend.

It came as snooker made its second return to the Marshall Arena since the Championship League a couple of weeks ago as live sport was given the go-ahead to proceed since being stopped in March due to the coronavirus pandemic. Lockdown was then announced on the 23rd March.

Snooker led the way back for Live Sport on June 1st with the Championship League.

Maguire’s six tons included a 135 high break – all with a brand new cue.
It was the first time Maguire had played proper snooker in three months but said when he got the call saying he might be in it, due to Ding withdrawing, he said he was having a beer in his garden and said he guessed he should get his new cue out and practice a little.

Seven times World Champion Stephen Hendry said it was just flawless snooker from the former UK Championship winner in 2004 and the best he’s seen Maguire play.
His pal Alan McManus said Maguire’s new sense of confidence came from a belief that he really does feel now like he is a top player and deserves to be among the World’s best players.
Maguire, 39, had also racked four tons on the bounce in the match, leading him to go 8 – 5.

Performance of the season…

Maguire said: ‘I felt sharp.’
But he seemed surprised by how well he played and quipped: That was a one-off fluke.’
He added, though: ‘it was pleasing.’

Stephen Maguire also adds his name to a list of players who have made four consecutive centuries in a match. John Higgins, Shaun Murphy, Neil Robertson, and Gary Wilson have all done it.

Less pressure with no crowds… 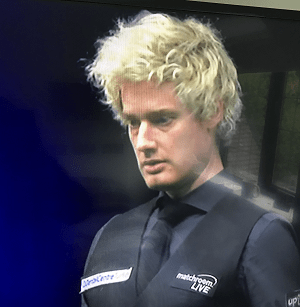 Neil Robertson, who made two tons and holds the record for the number of tons in a season  -1 03, said after that because there was no crowd, there wasn’t as much pressure as there normally is. He reckoned because of that, you’ll expect the standard to be much higher for the rest of the event.

Robertson tweeted that his hair would get a trim before the World Championship in response to a fan: “Ha ha, yes, will have a good trim before the Worlds.
He also added: “No crowds means it’s just like practice. There is literally zero pressure. Also, the pockets were set up like an exhibition table. Impossible to miss when you’re in.”

First-round losers collect 20K prize money, but the money does not count as ranking points towards their ranking position.

The new Coral Tour Championship has kicked off in the Welsh town of Llandudno as eight of the World’s best snooker players warm up for the World Championship next month in Sheffield.

The eight playing will be reduced to one come Sunday night 24th March and pick up a winner’s cheque of 150K. There’s 20K just for turning up in Llandudno.

The event is part of the Coral series which saw Judd Trump win back in Cheltenham at the Coral World Grand Prix, then Ronnie O’Sullivan made history in Preston at the Player’s Championship with his 1000th ton but the other week and won the event as well.

Currently, both him and Trump have the most points from the series to lift the inaugural Coral Cup but there are still others in the running for the trophy.

There’s also 20K on offer for any of the eight who makes a 147 by close of Sunday.

The first round (QFs) is best of 17, with the semi-finals best of 19 and a best of 25 for the final over three sessions.

The eight on show, includes the likes of…

All made enough points from the season’s one year list and the two previous Coral events to book a spot in Llandudno.

This event comes after Stuart Bingham lifted his sixth ranking title in Gibraltar, where he booked himself into the Champion of Champions later on this year by beating 2018 winner Welshman Ryan Day in the final 4 – 1. 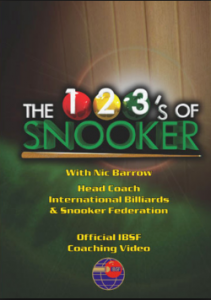