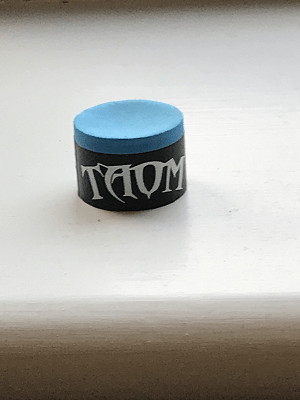 BACK IN THE DAY…

SnookerZone only knew about the King of Chalks, the yellow Triangle.

Back then, Triangle was really the only King of Chalks.

Now, SnookerZone could reel off a string of chalks there are on the market.

In fact, give us a spreadsheet and we’ll reel ’em off now!

And, that market is only going to grow.

Since the Pandemic kicked in back in March 2020, we’ve been collecting chalks for a rainy day so that when the time did come, SnookerZone would have plenty to review and plenty of chalk on the tip!

So, two of the chalks we were sent samples of before the Pandemic and Lockdowns kicked in were…

Taom Pyro is effectively a version 3 in the Taom series of snooker chalks.

It comes in a Taom box and all the pros are raving about it, but, when we played using it for the first time this weekend, did it pass SnookerZone’s five tests?

A) Did Taom Pyro chalk stick on the cue and stay on?

Yes. It did. It is less powdery than other chalks, but, it sticks to most tips well, and, on the current tip SnookerZone is trying out, the Taylor Made tip, it held well.

Yes, we were chalking less with Taom Pyro than we were with Taom V1 or V2. However, we still like the Taom Gold but Pyro (meaning FIRE) is very versatile on different tips.

But, does it say mean less chalking than using Russian Magic? Well, no. Russian Magic wins in that department, but you still can chalk for a few shots with Taom Pyro without chalking, but, you need to chalk more.

Yes, Taom Pyro is not as messy as other chalks. It is certainly, like the other Taom versions, less messy than your average square block chalk. We dipped our fingers in and it certainly doesn’t get your fingers dirty.

D) How does Taom Pyro compare to, say, the GLYGEN CONTACT chalk?

Well, for those who have not heard of GLYGEN chalk, this chalk is from Europe and SnookerZone was also given a sample of three of their chalks to try out.

It’s less powdery would you believe, than Taom Pyro, and does coat a Taylor Made tip very well. We will be trying these chalks out on other tips we review for SnookerZone, but, for now, CONTACT passes the four tests like the TAOM PYRO does.

That depends on your technique, but, if you want responsive spin, you will not lose any of that grip with Taom Pyro – indeed, same with CONTACT.

Because the CONTACT is slightly less powdery than Taom Pyro, but, it also just feels smoother when coating the tip. Don’t ask me why it feels that way. As a player, you just feel something for a certain product and we get this with the CONTACT chalk.

In summary, Taom Pyro and CONTACT are very similar but for us, the CONTACT wins just by a nose.

CHECK OUT THE PYRO ON AMAZON BELOW NOW