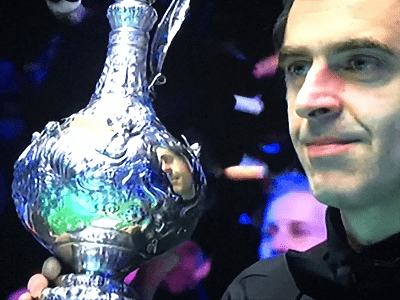 NEW WORLD GRAND PRIX Champion Ronnie O’Sullivan pleaded on ITV4 to the government not to introduce another lockdown.

His pleads came as the GOAT of snooker and six-times World Champion, 46, claimed his first title in 16 months, since winning his sixth World title back in 2020 in Sheffield when there was only allowed a limited crowd in during the middle of the pandemic.

During the period after, he appeared in five finals.

He told ITV4 after: “Please. No more lockdowns. Just get on with it.”

His pleads came as some snooker fans at the World Grand Prix were masked up watching an enthralling final between O’Sullivan and Neil Robertson, as the Rocket won the last ranking event final of 2021.

He was always two frames behind during the match, but he managed a spell of four incredible frames on the spin to go from 7 – 5 to 9 – 7 in the space of an hour.

He said: “For me, he’s got the best cue action ever. For me, he’s the greatest along with Judd Trump at the moment.”

He added: “For four frames, I found something. A bit like during the rest of the tournament.”

The Rocket said when fans first came back after crowds were allowed back in fully, it was a bit nerve-racking.

That’s when he pleaded to the government not to introduce more restrictions either this side of Christmas or after – which could come into place in a matter of days.

Robertson said he felt good in the final.

“I could have had a lead after the first session, but Ronnie battled really well to win the last frame and make it 4-4. I felt great throughout the whole final. At 7-5 I just wanted three more chances. Ronnie came out and played some superb stuff. The only thing that annoyed me was the miscue on the black at 9-8. I would have loved to force a decider. I know Ronnie lost a few finals last season, so as a fan of the game and a fan of him, it was fantastic to see him play so well tonight.”

So far, this season has seen the three class of 92 players appear in six finals. John Higgins has appeared in four finals.

Mark Williams and O’Sullivan have won the ones they’ve appeared in as Williams won the British Open back in the summer.

Snooker has provided much drama this side of Christmas with the new face of Zhao Xintong scooping snooker’s second most prestigious event the UK Championship, along with Luca Brecel, the Belgium Bullet, following up in winning the Scottish Open and appearing in two finals on the bounce.

Normal service was resumed though in the Cazoo World Grand Prix with two seasoned winners contesting a great final.

If you miss your fix of snooker now until the New Year, then fear not, as there is Championship League snooker broadcast on Freeview this week on Monday on channel 64 on Freesports.

Will Judd Trump Live to Regret His Jibes About Ronnie O’Sullivan, Soon?