Top 10 ladies player Suzie Opacic says women who are interested in wanting to try snooker for the first time should just “give it a go” as now is a great time to jump on board the World Ladies tour.

In an interview with SnookerZone, Opacic, 30, and currently no 7 on the WLBS tour said: “If you enjoy it stick at it and work hard, with the fun comes the commitment. There are great opportunities now to get involved and try to compete in tournaments as much as possible – this will raise your game considerably.”

She said there were also new faces at tournaments every time now and with more sponsors coming on board such as the snooker store Billiards Boutique, who sponsors Opacic, she is optimistic ladies snooker is on the up.

She said: “The WPBSA has provided huge support for the ladies game in the last few years, with WLBS now sitting under the WPBSA umbrella. There are now more tournaments, more ladies entering, better prize money and more sponsors than a decade ago, the restructure has revamped the women’s tour.”

But, Opacic, who has always had a love affair with snooker, but juggles a busy job at Heathrow working on the Third Runway project, said she’s been fortunate not to have encountered any stigma when it comes to ladies playing the game. 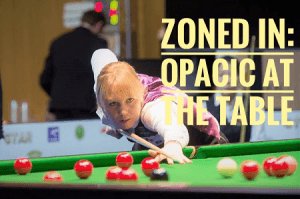 She informed SnookerZone: “I’ve been fortunate – growing up playing snooker from an early age means I started in the local leagues early and am a regular at my local club, and can’t remember any negative reaction towards me playing snooker (apart from a chap who snapped his cue in half playing me once but I think that was just frustration!).”

She added: “The clubs were quite different environment’s 15-20 years ago but I believe they’re much more family orientated now, more inclusive and the smoking ban changed the atmosphere of our local club to make it more junior friendly almost overnight.”

When Opacic started getting serious about snooker, she had won the World Ladies Junior Championship in 2006 and she admitted she had entered it on a bit of a whim and didn’t expect much.

She exclaimed: “To come away with a title was great.”

Opacic told SnookerZone that the Ladies tour is like one big friendly family, but when they’re on the table it’s dog eat dog.

However, she said: “I’ve played on the tour for a long while now and so know everyone pretty well. I get on well with the other English girls including Maria Catalano (Ronnie O’Sullivan’s cousin) and Reanne Evans, and my Welsh doubles partner, Laura Evans.”

“it’s nice to meet up with everyone at each tournament.  Laura and I have come runners-up in the World doubles 2 years running so have our fingers crossed this year! It’s also great to meet new players and talk to players from other countries. The Hong Kong girls are lovely and I love traveling to tournaments and meeting new people, seeing different places, for me the foreign tournaments aren’t just an opportunity to play in a different venue but a chance to explore other cultures.”

Getting Stuck In for the New Season

Opacic will be playing in the UK Women’s Championship this month in Leeds and says she has been working hard to climb up the rankings even further. She currently has coaching from a World Snooker coach Dave Mumford whom has given her some great training routines and practice sessions and she said she was looking forward to getting stuck in for this upcoming season.

She told SnookerZone how she got into the game.

“I started to watch snooker on TV when I was younger and my Grandparents got me a small kids table when I was about 9. I then started playing in the junior leagues at Chandlers Ford Snooker Club, and went from there. I used to play a few frames in the league every Saturday morning but it was only at around age 16 I started practicing more and taking it more seriously. I played my first tournament on the Women’s circuit in 2006 which happened to be the World Championships, where I won the World Ladies Junior Championship, so that gave me the incentive to play more!”

Opacic plays in the Southampton District and Snooker League during the week and in local competitions on the weekend.

But she admits it’s becoming a bit of a challenge juggling a busy day job and not to mention a three-hour commute!

She adds: “My ambitions in the game have always been to progress as high up the rankings as I can – my highest ranking position has been 5th and I’ve remained a pretty constant top 8 player – I finished last season ranked 7th. The standard is increasing and it’s difficult to 100% commit to the tour if you’re not playing full time, especially with tournaments moving further abroad and needing to manage annual leave carefully. However, I’m committed to continually striving to push my game to improve. I put less pressure on myself at tournaments now than I used to – pressure adds to the nerves and doesn’t do much good for your cue action, so I try to just enjoy playing but compete as hard as I can.”

Because Suzie Opacic has a twin sister. Fortunately, she’s not a cueist so you haven’t got two talented Opacic cueists to deal with!

And the snooker player Opacic added: “She doesn’t look like me.”

The UK Championship for ladies snooker runs on the 15th and 16th September at the Northern Snooker Centre, Leeds.

SnookerZone wishes Suzie Opacic well in the tournament and her career.

Are you a lady and want to try snooker? Then, as Suzie says, just “Give it a go.”

Discover all about the Women’s Snooker tour by clicking the logo image below:

A special message for those who visit SnookerZone regularly…