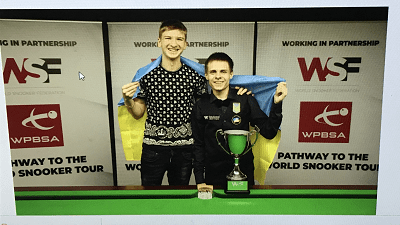 WITH the troubles going on between Russia and Ukraine right now, it was fitting that Ukraine junior Anton Kazakov came through to win a two-year professional tour card on Friday in the World Snooker Federation U-18 junior tournament.

Held at the luxurious Ding Academy at the home of snooker in Sheffield, Kazakov is the second Ukrainian to get awarded a tour card as Julian Boiko, 16, was also awarded one for the main tour in 2020 and became the youngest professional player at the age of 14.

With over 60 players entering, it was a tight battle with plenty of talent on show in a global field.

England’s talent Stan Moody, 15, competed in the event, and was one of the hotly-tipped favourites to lift the title, but came through a tough draw against the much older experience of 18-year-old Anton Kowalski from Poland in the last 16.

Moody last month had wowed fans at the fast and furious Snooker Shootout and won his debut match in a pro event against Lu Ning.

He goes again in the WSF main open event.

However, it would be Anton Kazakov who was later presented with both the trophy and the formal offer of his World Snooker Tour card by WSF President Jason Ferguson.

Former WSF Open finalist and countryman Iulian Boiko was among those in attendance to celebrate a landmark victory.

The snooker continues in Sheffield with the start of the flagship WSF Championship on Saturday, and an incredible field of over 250 players are set to battle for the second professional tour card on offer next week.

SnookerZone wishes those competing in the main event the best, and congratulations to Kazakov.