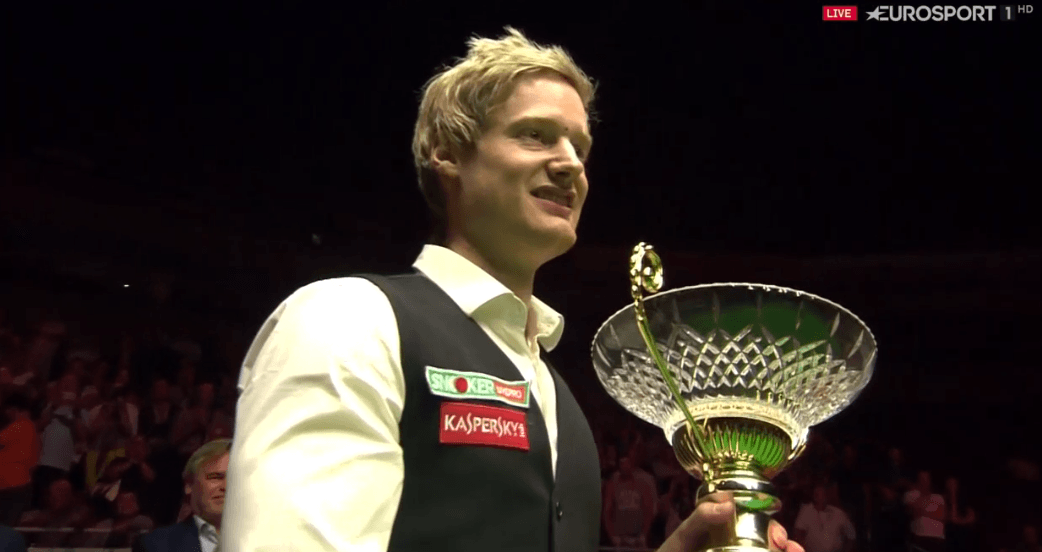 Last weekend was a packed weekend of snooker as the new 2018/19 season kicked off with Neil Robertson claiming his second Riga Masters title in three years.  The former 2010 World Champion saw off the talented Jack “Lightning” Lisowski in the final 5 – 2 – and on route to the win made a 117 in the third frame. Lisowski, 26, was appearing in his first ranking final after having a positive season last season. The 36-year-old Melbourne man raced into a 3 – 0 lead having had a slice of good fortune in the second frame when Lisowski missed a key black to potentially force a respotted black. Robertson tried a double and fluked it after having missed it. Lisowski played some great safety in the match, but wasn’t able to outscore the Thunder from Down Under – but he battled hard from 3 – 0 down. Robertson’s win saw him land his 14th ranking title and the 50K first prize.

It was Robertson’s lucky socks that did it, he said, after the final!

Awesome to win the 1st ranking event of the season!🏆 Thanks for all the support guys. China next week! World snooker finally taking some decent photos thanks to @ellowardy 👏🏻👏🏻👏🏻 https://t.co/oNslKuxAG3

Former professional Barry Pinches claimed the third Challenge Tour event, which was low on numbers (24) – and also held in Riga during the Riga Masters. The event, which is supposed to entice at least 64 amateurs into competing for a coveted two places on the World Snooker tour is obviously for some too much of an expense for travel costs – despite there being originally high demand for a Challenge Tour of sorts. However, 48-year-old Pinches, Brandon Sargeant, and former pro-David Grace have all put themselves in contention for one of the two tour cards on offer for this ten-event series of amateur events.

Only time will tell in seeing how many decide to turn up for Event four, which takes place in Furth, Germany at the end of August, coinciding with the Paul Hunter Classic.

The World Open in Yushan, China, begins in a week’s time…

PS: Keep an eye out for SnookerZone’s new content in the Zones which are coming this week!