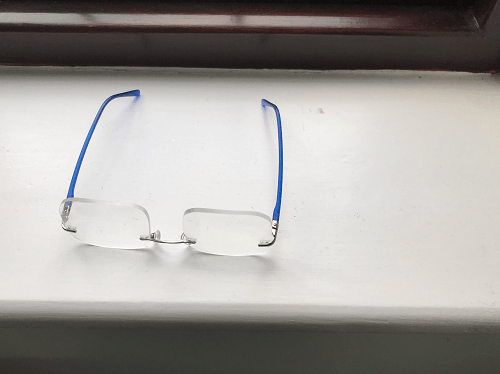 We wrote a long piece about the benefits of wearing snooker glasses in that article, so we’re not going to go over old ground about why you should wear glasses for playing snooker

These, we were told, are one of his bestsellers, and, before delivery, SnookerZone was skeptical at why exactly they would be a best seller.

Glasses are glasses, after all, aren’t they?

However, when the Blue Baron Rimless glasses were delivered, SnookerZone immediately realized why these were a best-seller!

Upon opening the package, there was an instantly recognizable difference between the standard pair and the more expensive pair. These felt much lighter when handling than the Hustler Half-Rims.

They were as light as a feather!

There was also another key difference, and this was more recognizable when playing on a snooker table. The field of vision from the Blue Barons was much wider than the Hustler Half-Rims. This was noticeable on longer pots especially.

Although the Hustler Half-Rims felt comfortable, the Blue Barons felt even more comfortable, and you felt like you weren’t even wearing glasses when playing. The Blue Barons also had a much more modern feel to them than the standard, as they didn’t look bulky on the face. They felt a lot sleeker.

Interestingly, the overall verdict for SnookerZone was these were a more comfortable fit than the Husler Half-Rims.

The Blue Baron Rimless has certain features for the following benefits…

So, what pair of snooker glasses should you get for playing snooker?

When SnookerZone reviewed the Hustler Half-Rims, we mentioned that those were great for the occasional player. But that you could also wear them if you’re a more regular player.

However, after having tried the Blue Barons, our opinion has changed. The Hustler Half-Rims are great if you’re just an occasional player who plays for fun and enjoyment rather than serious. If you’re looking to spend lots of time in the club playing and playing in competitions, think about a more expensive pair and a lighter pair like the Blue Barons, because, snooker, being the intense sport it is, you will notice a difference between a “heavier” pair and how it affects the feel on your face after a period.

We really felt the Blue Barons are for the more serious player, and, investing in a pair like these would be advisable as we said before for long-term comfort – if you’re looking to go far in the game.

So, you now have a choice.

Want extra comfort and a sleek fit for longer periods of snooker playing? Go for the Blue Barons.

Just want a standard pair to enjoy better games with your mates? Opt for the Hustler Half-Rims.

SnookerZone has an affiliate arrangement with SnookerSpex.