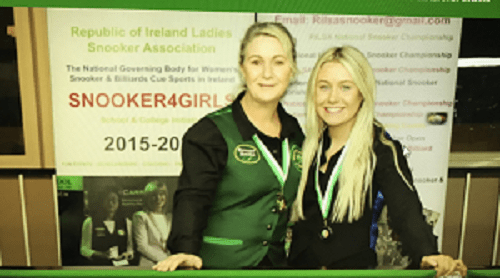 There have been very few competitive family affairs on the baize.

The most recognized one was the rivalry between brothers Joe and Fred Davis. Both were very good snooker players and very supportive of each other, but also great competitors.

In more recent times, there are the professionals of the Lines’ family, with Dad Peter championing the cause with a World Seniors snooker win a few years ago. Son Oliver is following in his father’s footsteps and attempting to go even further in the game.

They have met each other in a competitive match which was earlier this year in March.

And 35 years ago, Geoff and Neal Foulds met twice in competition as father and son on tour.

In the amateur scene, in Ireland, another family affair has surfaced. The mother and her three, two of which are twin daughters, are known as the Randle family.

Last month, mother Suzanne Randle, 47, won her first Republic of Ireland Ladies Snooker Association (RILSA) title as she defeated one of her daughters in the final, Carrie.

A hard-fought and closely contested match, according to the RILSA website.

SnookerZone briefly caught up with Suzanne Randle to find out a bit more and how they got involved in the game and what it’s like having a family affair in snooker on and off from the table.

She said: “Danielle, my eldest daughter, plays snooker and myself with my twin daughters Carrie and Megan. We used to go watch her. We got interested and decided to play ourselves.”

She said she has played her daughters many times and beaten them, but she eventually won one.

She added: ” Carrie was very supportive and didn’t begrudge me the win. It makes us very competitive where we are not mother and daughter but rivals, but also respectful and supportive to each other.”

On playing the game, Suzanne says she finds it very therapeutic. And also a great way of staying in touch with the snooker gang. It’s apparently a genuine family community at the Sharkx Snooker Club in Newbridge.

Suzanne, from Limerick, has had no coaching and is self-taught.

As far as the standard of snooker from women in Ireland goes, she said the standard is good. Paula Judge, Michael Judge’s sister, a recent Seniors champion, is a good player.

But there are not as many as the pool players she said as she is into her 8 ball pool!

From Suzanne's chat, you can tell she is a woman who doesn't beat around the bush. She answers the questions directly and to the point.Click To Tweet

WATCH AS A FEMALE MORNING JOURNALIST PERFORMS A SNOOKER TRICKSHOT…

On what she thinks is needed to move the amateur game ahead, she simply told SnookerZone:

If only it were that simple.

On the setup at RILSA, Suzanne is very complimentary.

She said: “It is very well run and the background work is sometimes unnoticed but Dan O’Carroll is great at what he does and tries his best to further the Irish Ladies in every way he can. Snooker is excellent for perfecting the basics needed for my 8 ball pool e.g. cue action, stance, cue ball control. It started out to just a hobby to do with my children but now it has gone to an international level.

Her favourite player is the former World number one and four times World Snooker Champion Mark Selby, who was also a World Pool Champion in 2006 and the only player to have been a World champion in the two sports.

She jokes: “Mark Selby because he originally was a pool player, and married an Irish lady haha. He ticks the boxes in all aspects of the game and I enjoy watching him play.

Again, SnookerZone asked Suzanne if there was anything in the game that she would change, what would it be and she was again very direct!

This is very true. And more so the fact that some aspects of the amateur game are living in the dark ages. But that debate is for another time.

Finally, Suzanne recounts what the atmosphere is like on the drive home after one of them has won, beating the other.

Imagine the scene. One of them is driving. Silence. You could hear a pin drop. The yearning for someone to speak, but too afraid to.

She said: “All my daughters are very competitive against myself and each other to the extent that the winner is afraid to speak in the car to not upset the loser, which can be very funny. I have captained my country in 8 ball pool. On a couple of occasions, myself and my 3 daughters were on the Irish team at the same time, which I would think would not be very common at European Championship and home nations. Each of my 3 Daughters has won an All Ireland snooker title in 3 different categories.

She adds with a tease: “When they start winning me money, then I will be happy for all the driving I have done bringing them from competition to competition haha. Joking aside, we play the game for enjoyment and competitiveness.”

Switch the snooker on…

“Rocky and the King”…

Choosing and chalking up…