YESTERDAY saw the launch of Snooker 19 – the new revolutionary cuesports game which saw World Snooker team up with Ripstone and Lab 42 to create the “definitive snooker gaming experience” on XBox, PC, and Playstation 4 & Nintendo Switch later on in year.

The virtual launch coincided with the conclusion of the real 2019 World Championship qualifiers at the English Institute of Sport in Sheffield where 16 qualifiers will now pit their wits against the top 16 players in the World at the iconic snooker venue hosting the World Championships since 1977 the Crucible Theatre starting on Saturday.

Snooker 19 aims to mimic the whole tour scene where players earn those ranking points to move up and players can also earn to buy cues and top equipment to give them that edge over the rest.

“Being big fans of snooker, we’re thrilled to finally bring Snooker 19 to the masses,” said Justin Forrest of Lab42, Game Director of Snooker 19. “This has been a big passion project of ours and the chance to work with World Snooker was a dream come true. We’re confident that we have created the definitive snooker experience, and hope you will agree when you try Snooker 19 yourself.”

Snooker gaming has gone through an evolution. From the days of the Jimmy White Whirlwind game on Atari’s to the early versions of World Championship Snooker on Playstation’s 1, 2 and 3.

There are lots of snooker games now on mobile and tablet, including Pro Snooker 2018/19 and Snooker Live Pro with stars Neil Robertson and Judd Trump. Fans now have a choice of when and where they can pretend to be their favourite stars – but it does beg one question: Will it make kids want to pick up a cue in real time, or will it just keep them hooked in their bedrooms?

For SnookerZone, nothing quite beats playing the real thing…

We’ll review the game in full, when we come back from the real thing in Sheffield in just under two weeks time!

Meanwhile, you can now start enjoying the virtual experience on PC, XBox and Playstation below… 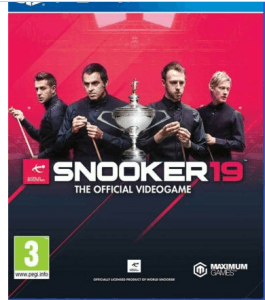