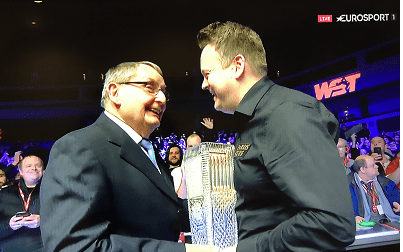 Shaun Murphy displayed some magical snooker to win his ninth ranking title at the 2020 ManBetX Welsh Open at the weekend.

The 37-year-old had done most of the damage in the afternoon session when he led the Warrior Kyren Wilson 7 – 1 and only needed two more frames in the evening to secure his first Welsh Open title, 14 years after appearing in his first final in Wales.

It was a disappointing afternoon for the 28-year-old Kettering potter Wilson, who had come off the back of a terrific week in Cardiff after having knocked in a 147 at the start of the week, and also knocked out Neil Robertson and Ronnie O’Sullivan on route to the final.

Murphy, receiving a cheque for 70K and the Ray Reardon trophy, said after: “It’s quite difficult this.”

He added that snooker is very much a gladiatorial sport and it’s not easy when things aren’t going well and it’s not like golf where you have a caddy whispering sweet nothings in your ears.

Lady Luck was on Murphy’s Side…

The Magician said he had seriously contemplated quitting the sport last season, but had some serious conversations with his close people and went back to tweak his game.

He had come through a gruelling semi-final match with Yan Bingtao of China 6 – 5 and was expected to come to the final drained, but, instead was as fresh as a daisy and Wilson looked the more fatigued of the two.

Murphy started the afternoon with a ton and ended it with a ton. And on starting the evening, he made a 102 after fluking a red to the middle when missing a long red.

In the final frame he needed to win, Wilson was in first with 56, but he missed a medium-range red and Murphy steely cleared up with a 73.

He admitted after he had had some lucky run of the ball during that match.

Kyren said after about Murphy’s play: I hold my hands up he was fantastic.”

Murphy also told Eurosport after that one of his goals was to make double figure ranking event wins.

The former 2005 World Champion has won two ranking events this season, including…