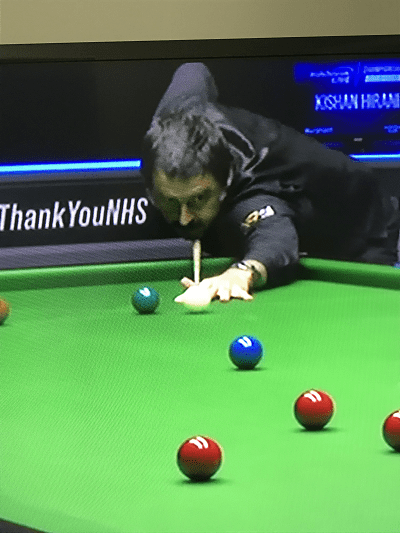 Now, he’s sporting a Gaucho-style moustache in tribute to Maximum man Willie Thorne, who is suffering from cancer.

He told WST: “I haven’t played since February,” said O’Sullivan. “I played the semi-finals of the Welsh Open and you can’t really count the Shoot-Out as it’s only a frame. I did two exhibitions but other than that I’ve only played for about four or five hours last week but it just shows you probably don’t need the practice!

But some things of the 44-year-old Rocket don’t change.

He strode into the Marshall Arena in Milton Keynes and from the off racked a ton in the first frame.

It was to be the start of a comfortable evening for the five-time World Champion as he comfortably won all three matches quickly and in style. He was impressive in his last match with Chris Wakelin, as he made breaks of 93 and 97 to see himself into the last 16.

Ford motored to a group win…

Leicester’s Tom Ford also had a belter in the other group played, and also joins O’Sullivan next week into the remaining matches of the CL.

Ford also told WST: “I played well today. People had chances against me because we are all a bit rusty. I came into it not expecting to do well because I’ve not been practising that much, but we are all in the same boat. But when you don’t have too much pressure on you to play well you can play a bit better than you think.”

He added: “I got in the balls earlier in the first two frames against Rob. It was going to be a difficult match anyway because he’s a good player, and he had played the previous match whereas I was a bit cold coming on. Fortunately, Rob missed a ball – he said because his tie got in the way – and I was glad to get over the line.”

“The venue, the hotel, the staff, the organisers, everybody has been brilliant. It is better than I expected it was going to be. I expected it to be good and very professional but it has exceeded.”

Bingham in the box…

Stuart Bingham will play in the Saturday group of the Championship League as the 2015 World Champion has been dabbling in a spot of commentary with the ITV4 team this week with David Hendon and Phil Yates, along with other players Dominic Dale and Joe Perry.

The coverage starts at 3PM on ITV4.

Tour Championship to return this month…

Snooker’s coverage on ITV4 continues in June as it leads the way with The Tour Championship coming back after it was postponed in March due to the Covid-19 Pandemic and lockdown. It will be played at the Marshall Arena behind closed doors from the 20th – 26th June.

WST boss Barry Hearn trumped the announcement and said: “We have proved that despite the many challenges associated with running events in the current conditions, it can be done. There is no sport which can meet the required regulations on isolation, sanitisation and social distancing as rigorously as snooker can, and that is why we have set an example for other sports to follow.”