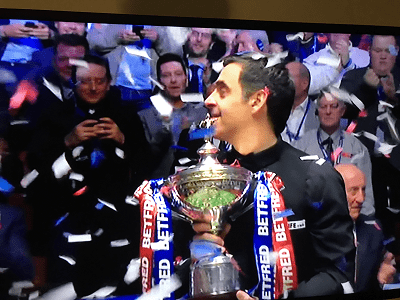 Ronnie O’Sullivan gave a huge hint that he was up for overtaking his and Stephen Hendry’s equalling record of 7 World titles, and making it a record 8 World titles next year.

His comments came as he lifted his seventh World title at the 2022 Betfred World Snooker Championship on Sunday, equalling that of Stephen Hendry’s, by defeating 2019 Judd Trump in the final 18 – 13.

The Rocket, 46, now the oldest World Champion has now made it a triple 7 on majors with 7 UK titles, 7 Masters titles, and 7 World titles.

But he told the BBC’s Hazel Irvine after the match with Trump that he supposes he will have to come back next year and go again for an eighth.

However, he also added: “But this place brings out the worst in me.”

On Judd Trump, who was trailing 12 – 5 in the session on Saturday, he lavished praise on the 32-year-old and said that even though he wasn’t playing well, he’s going to win a lot more in future.

O’Sullivan, added: “Everyone better watch out, because this guy is gonna do a lot more.”

They hugged for at least three minutes after the match, as the emotion of the occasion got to both men.

Congratulations to the rocket Ronnie O’Sullivan. Won his first major in 1993 and still winning world titles in 2022. There will never be a greater snooker player 👏👏🏆🏆🏆🏆🏆🏆🏆

Standing on the balcony of the Crucible overlooking the table, Stephen Hendry, when asked if he was happy to share 7 World titles with Ronnie for just a year, beamed a smile, and humbly said…

It has taken O’Sullivan 21 years to reach 7 World titles, because of the strength in depth of the modern game, whereas Hendry won 7 in the space of 10 years scooping his seventh in 1999.

Judd Trump said he was tired in the first session and wasn’t playing well, and had said that coming into the start of the tournament.

But he came in with a B game that managed to see off the likes of Mark Williams in the semi-finals, which ended in a thriller of a decider.

The World Championship viewing figures were according to some, 5 million, as the snooker final between the two was the most watched programme on Sunday night.

Back in 2020, Ronnie O’Sullivan claimed his sixth World title to a modest crowd – during a pandemic. Now, two years on, the Crucible was rocking to the Rocket.

The 2022 World Seniors Championship gets underway at The Crucible on Wednesday.