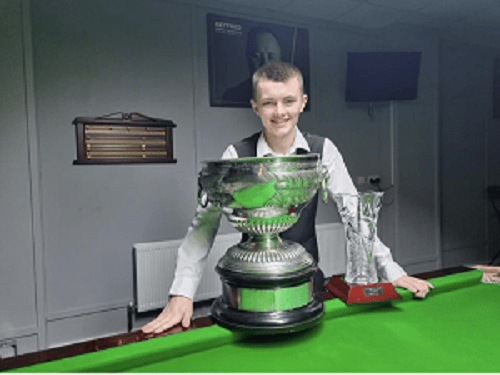 MARK ALLEN’S stepson Robbie McGuigan lifted the 2021 Northern Ireland Amateur Championship over the weekend, beating his stepfather’s record of being the youngest by two-and-a-half months.

That means McGuigan becomes the youngest ever Champion at the tender snooker age of 17.

McGuigan has been tipped as a future star by many, as this win illustrates the Northern Irish lad has a solid future in front of him in snooker.

On the way to his first-ever amateur ranking event win, McGuigan also made a 129 high break.

NIBSA, the Northern Irish Billiards and Snooker Association said this:

Robbie’s win today was his first senior ranking event win which may somewhat come as a surprise to such the talented lad that he is. Today’s win came against his clubmate & practice partner Rab McCullough by a scoreline of 10-4, Rab said himself before the game that he knew his safety had to be 100% as Robbie’s scoring can be insane at stages.

Very pleased to have become the youngest ever NI champion 🏆 onto the next one🙌 pic.twitter.com/oTF4ZpP6Ct

They added: “Robbie was presented with his crystal & also the Northern Ireland Amateur Championship trophy where his name will join an illustrious roll of honour. How many times his name will appear on that trophy will remain to be seen though I’m sure quite a  few of us will be hoping that he is not on the amateur circuit for much longer & that we are cheering him on the TV as we all wish him the very best for his future. Both players will also be nominated for the Nibsa wildcards for the 2021 Northern Ireland Open.”

Those now professionals who’ve won the NI Amateur event have gone on to bigger and better things.
Mark Allen has ticked off the Masters and the Champion of Champions on his professional snooker CV and Jordan Brown, a newbie pro in the circuit last season, bagged his first ranking event win the Welsh Open, defeating the six times World Champion Ronnie O’Sullivan in the final!

Just wanna say a huge congrats to @Robbiemcg147 on an outstanding achievement today becoming the youngest ever NI champion. I know first hand the hard work he puts in every day & along with his talent it’s well deserved. Hopefully this is only the start for big things to come👏👏