When Taom chalk was released well over last year, there was a frenzy in the snooker world.

Everybody was desperate to get their hands on a piece of  “magic”. 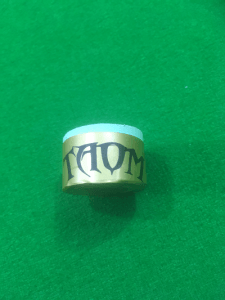 It was the best in the business – a revolution, described by some top players.

It was said to…

And to some extent it did…

Russian Magic chalk has slowly made its way onto the snooker circuit and is another chalk that is revolutionising the game.

Now, SnookerZone managed to get a hold of a piece off of a Marc Lockley, who runs the SnookerCrazy website, a website designed to give you advice about cues and re-tipping and that kind of stuff, (we thank him for sending a sample over to SnookerZone) and we took it for a whirl at the weekend of the 1st/2nd June 2019.

SnookerZone has been using Taom gold soft now for a few months and has had no problems with Taom at all.

So when we got our hands on a product named “Magic” on the label, we were naturally sceptical. In any business, it’s a gamble to label a product “Magic,” but if you stand by the product and 100% believe in it, then why not?

Now, the first thing to mention about Russian Magic is it looks like any other piece of chalk – apart from Taom, of course, which is round.

When you put your finger in Magic, it is a little messier than Taom, but, here’s where Magic gets interesting, although it’s messy on hands, when you spread it over your cue tip, it becomes less powdery and holds very well.

We were playing with a Talisman Pro tip at the weekend and found the chalk held well on it.

Now for the “Magic”.

After doing some pre-research, in certain Youtube videos pre-playing, SnookerZone found out you can play for at least six shots before you need to spread more Magic on.

Well, when SnookerZone played over the weekend, we saw how many shots we could play before a miscue!

On our first test with it, we played five shots, and, for fear of getting the dreaded miscue, we chalked up and for the next five, we rinsed and repeated.

On our second test on Sunday, we went SEVEN shots without chalking – and even then we were gaining confidence and but for the paranoia of getting a miscue, we chalked up on the eighth shot!

We then went for another six without chalking…

Now, if you’re a player who enjoys chalking on every shot, then Russian Magic may not be for you!

It really is chalk for people who like to chalk every other shot, or, sometimes prefer to chalk every so often. Sometimes, some amateur players forget to chalk up – and, with this chalk, it gives you peace of mind you won’t miscue if you haven’t chalked up!

But let’s just say this:

Chalking up should be part of your pre-shot routine, as it helps to calm you down and plan the shot!

Simple answer. No. The chalk is the same as Taom in that respect. It leaves very little chalk residue on the table and you don’t get any marks on the cue ball.

For SnookerZone, the jury is still out on whether chalk alone causes kicks. It may well play a part in it, but; we think there’s more at work from the Snooker Gods for kicks than just chalk! We feel this for miscues too, but certainly the advice from us is: chalk your cue regularly if in doubt!

The big frenzy with Taom was/is the price. At £15 pound a block lots were calling it a rip off. Some claimed it wasn’t doing what it said. others couldn’t be more pleased with it.

For chalk, anything over £2 for a block would be considered expensive. But, for two blocks at roughly £12 for Russian Magic, that’s far cheaper than Taom.

For SnookerZone, Taom gold soft for us is still one of the best chalks on the market, even at the price.

But, if you’re looking for a cheaper alternative that does more or less the same then Russian Magic is a no brainer.

Marc Lockley, who runs SnookerCrazy is selling the Russian Magic Chalk and told SnookerZone it sells like hot cakes.

So breeze over to the website and pick up a pack of Russian Magic now, here…

Lack of Mess on Table