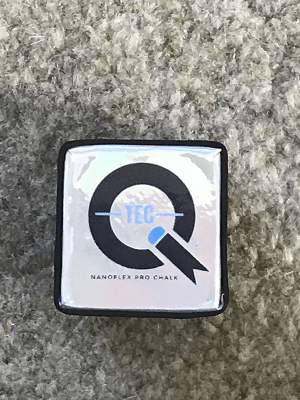 In snooker in recent years…

There has been an explosion of NEW “REVOLUTIONARY” chalks onto the market.

Companies have been releasing chalks which boast reduced kicks, add better grip to tips, WHILE looking stylish at the same time doing it.

Taom was one of the first to bring out a stylish rounded chalk which did all of the above, and looked good.  A piece of luxury in your hand at a HEFTY price.

In fact, CHALKS have been gradually increasing in price. Gone are the days of the Triangle dominating a now-crowded market. You have much more CHOICE now and can shop around.

Then, there was an explosion in square chalks being released. Russian Magic chalk was boasted as one of the best around, where you would be able to chalk less, and yet still be able to grip shots even after NOT chalking for at least five shots!

Now, another chalk has emerged onto the market. Qtec recently released their Nanoflex Pro Chalk. SnookerZone got to review it last weekend and here’s the initial verdict.

What is Nanoflex Pro Snooker Chalk and why is it different?

According to the maker of the chalk, the formula used in the process of creating the chalk ensures that more of the chalk stays on the tip and does not flake off like some other chalks.

Qtec told SnookerZone: “At the end of the day, chalk is to provide grip above all else.”

And added: “I’m a fan of Taom gold soft, but the only negative for me is the lack of grip so wanted to create something with more grip. I’m pleased with the results.”

SnookerZone has tried many chalks now, from Triangle/Pro to Taom to Russian Magic to Master, and has found that some chalks leave small flakes on the table and some even on the cue ball. Sometimes, you can be constantly rubbing little MARKS of chalk off the table. We didn’t find that we were doing that as often with the new Qtec chalk.

Others also can make a mess of your cue with leaving marks on causing grime.

Quite simply, Nanoflex chalk was impressive on four fronts.

====>After wiping down cue after playing, there wasn’t a lot of chalk residue on the cue coming off the WET WIPE – that was a plus.

====>SnookerZone  was impressed with how the chalk STUCK to the tip consistently and flakes of the chalk didn’t FALL off as much.

====>SnookerZone also didn’t need to chalk the tip as much – similar to Russian Magic.

The Nanoflex allows for BETTER grip on deep screws…

There was a shot SnookerZone played in a friendly frame with a mate where we tried to screw in behind the black to lay a snooker and we were screwing from at least 7 inches with the cue ball and we almost laid the perfect snooker! It has plenty of grip when you chalk and you don’t need to CHALK UP EVERY SHOT.

Qtec also have their own Nanoflex tips and the chalk is designed as a pairing with those. However, SnookerZone was using a different tip to try the chalk out – using an old Regency tip and the chalk HELD well on it.

The QTec Nanoflex Pro Chalk is just another option of chalk you have as a consumer of snooker chalks. For SnookerZone, there are three chalks that you MUST try, and then MAKE your decision about which one is RIGHT for you. They are: