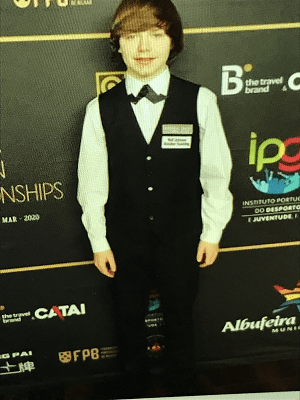 AFTER a long 18 months of no snooker for juniors and young adults, last weekend finally saw the return of normal service for the amateur game in England at the Cue Ball Snooker Club, Derby.

The English Partnership of Snooker and Billiard’s tour playoffs got underway on Saturday and Sunday as nine qualified for next year’s EPSB’s U-21 Premier Development tour.

There were many stars throughout the busy weekend on the baize, but Liverpool’s Mikey Roberts, 16, who has trained at the Scottie’s Snooker Club in Liverpool for more than five years, under coach Neil Johnson, had a 100% match win record throughout the two days.

Snooker Coach Neil Johnson said on Facebook: “Congratulations to one of my young students Mikey Roberts who has gone unbeaten throughout the whole weekend in Derby to qualify for the EPSB English Junior Premier Tour.

He added: “Mikey is another fantastic little success story to come out of our Scotties Junior Giants Programme, and this latest achievement is another important step on the ladder for his ongoing development. Well done, Mikey Robbo

Gutted for another of our juniors Luke Flanagan who just missed out today. Next time for sure Flanno.”

Many fans of the youngsters flooded onto Facebook to offer their congratulations to the talents of the future.

One said: “Great job Mikey and stay focused Luke. You are both working with the best in the business.”

Those who didn’t make it may still get on as a “top-up” place said the EPSB.

Mikey Roberts said on Facebook: “Just got onto the premier tour, topped my group on both days. Didn’t lose a match. Onwards and upwards now

Roberts joined Scotties in 2014 at the age of 11, and on Neil Johnson’s website, Johnson wrote:

“Mikey’s development is very interesting. His cue action is ‘Rolls-Royce’ and I believe that if he works hard enough, he could become a top cueist.”

He added: “His game continues to improve and he was recently picked to represent England at the European U/18s Championships in Portugal. This first tournament abroad was all about gaining vital experience but he did very well in winning 4 of his 6 matches before going out in the last 32.

He also added of his progress:

'He's a cracking developing cueist and he's at the exciting stage where I'm challenging him to cue every ball whatever the circumstances.'Click To Tweet

When people mention Rolls Royce cue actions in snooker, we often think of top players such as Shaun Murphy or Kyren Wilson.

Both were talented juniors and came through the ranks to become top 16 professionals and have the Rolls Royce style cue action.

Covid-19 has denied many youngsters over the past year of being able to play and practice the game they love.

Now things are resembling what we would call normal, let’s hope there can continue to be a resurgence in youngsters taking up the game and talents such as Mike Roberts being able to shine through in the future.

The Incredible Tale of Two Marks Making Their 2018 Mark