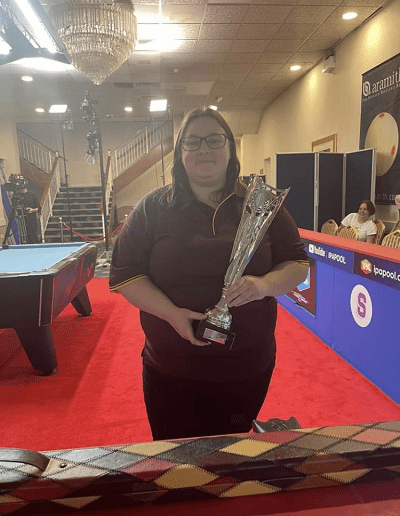 THERE was some great amateur and professional cue sports coverage going on over the weekend.

You might think that SnookerZone’s report would focus on the return of Snooker’s third ranking event of the season the Home Nations Northern Ireland Open, where the top guns were back in action in Belfast.

It was a glorious weekend for Northern Ireland’s Mark Allen who fired in a 147 on his home turf to the delight of the Belfast crowd. It was his second career maximum.

However, SnookerZone has decided to focus on the world of IPA pool and in Bournemouth at the seaside, the International Pool Association was hosting the English Open events tour 3.

There were some great events on show at the event with the English Amateur and English Ladies’ singles event included.

Kerry Griffiths world ranked no 1 on the IPA Women’s rankings was backed by the IPA on their website to go all the way in the event as they said she is improving faster than any other player and is a real force to reckon with in the Ladies game. Not exactly an outsider, but in with every chance of a second season success here in Bournemouth.

However, it wasn’t to be as the final of the event saw two newbie finalists who had never been on a TV stream before in a final.

Kelly Denton had done remarkably well to reach a final with the more experienced Danielle Randle looking to pick up silverware for the first time as well.

In commentary, the team said that Denton’s break off was as good as any professional break off they had seen. And it certainly was.

SnookerZone readers may be aware that Danielle Randle is the daughter of Suzanne Randle, who we interviewed a while ago here on this site.

The match started off nervy, but it was Denton that came out firing. There was a nip and tuck affair which took them to 4 – 4 in a race to five until Denton finally came over the line to win her first ever Ladies singles title. Quite a feat, considering it was her first tour event! Denton isn’t even ranked on any of the IPA ranking lists!

She’s one to watch out for in future in the 8 ball women’s game.

Runner-up Danielle Randle was devastated losing in the decider and said after on Facebook:

Thought I played well in patches, might have been too attacking at times.. but was a little unlucky too..

She added; “Kelly just didn’t miss in the end and it was an outstanding achievement winning the tournament on her first tour

Kelly Denton had recently celebrated her 30th Birthday this month so a double celebration for October.
Next month, the IPA tour 4 goes to the Isle of Man.