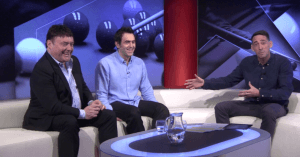 RONNIE O’SULLIVAN scraped victory to win the 2018 Champion of Champions over the weekend narrowly defeating Kyren Wilson in a thrilling match that went down to the wire at the Ricoh Arena Coventry.

O’Sullivan, 42, was 5 – 1 up at one point in the first session – but then Wilson managed to pull his socks up and get stuck in in the final session and start piling on the pressure on O’Sullivan at 8 – 6.

The Rocket was not in vintage form, but at 9 – 8 as the roles were reversed and Kyren was on the up, lady luck saw Ronnie fluke a snooker with a wild rest shot which ended with Ronnie forcing a decider.

Eventually, O’Sullivan knocked in a ton in the final frame to dash Wilson’s dreams of a big major win over the Rocket, who had also given him a drubbing in the 2017 English Open.

Tough one to take last night not the ending i hoped for, I fought as hard as I could throughout the whole day and gave it my all. Congratulations to Ronnie!! Now onto the #NorthernIrelandOpen Thankyou all for the kind messages!

Wilson said after the match he had played terrible and added it was his own fault when he could have seen out the match but missed a crucial red on a 61 break in a frame which he could have won the match.

Both O’Sullivan and Wilson admitted they had not played great in the best of 19 encounter.

The Rocket’s 100K win is his third Champion of Champions title and he has qualified for the 2019 edition next year.

This week sees the ranking event the Northern Ireland Open in Belfast as part of the Home Nations series which saw Stuart Bingham lift the English Open in Crawley.